Hotbeds of separatism in modern Europe 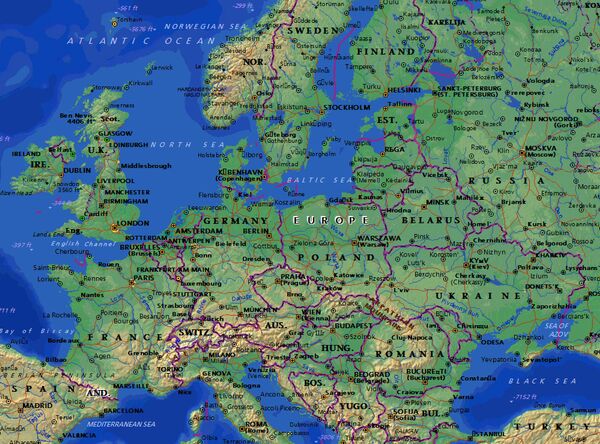 Subscribe
Today, Europe is the venue of both integration and separatist processes. Experts have calculated that in the 21st century more than 10 new states may emerge in Europe.

MOSCOW. (RIA Novosti). Today, Europe is the venue of both integration and separatist processes. Experts have calculated that in the 21st century more than 10 new states may emerge in Europe.

Basque Country is the most traditional example of European separatism. In Spain, about two million Basques live in three provinces of what is called Basque Country. It has broader powers than other Spanish regions; the living standards are above the average; and Basque is recognized as an official language. But despite this devolution deal, the advocates of secession from Spain (to be merged with the Basque-populated part of France) are not going to stop at that.

Francisco Franco was responsible for the growth of separatism - the Basques were not allowed to publish books and newspapers; conduct instruction in Basque (native name - euskara); give children Basque names or put out their national flag. Euskadi Ta Askatasuna or ETA (Basque for "Basque Homeland and Freedom") was set up in 1959 as an anti-Franco party. Franco has long been dead and the Basque country has received the autonomous status, but this does not prevent the Basque terrorists from fighting. More than 900 people have fallen victim to the struggle for "independence."

Catalonia, an autonomous province in the north-east of Spain is also a headache for Madrid. Having their own language and culture, the Catalans have always stressed their separate identity in Spain. Their province enjoys extensive autonomy in Spain, a constitutional monarchy. Relations with the central government in Madrid are being regulated by a separate charter. In 2005, the new version of the charter said that the Catalans are a separate nation. However, there are dozens of parties and public organizations in the region, mostly left-wing, which are advocating cessation from Spain. Their goal is to hold a referendum on independence until 2014.

France has a long-standing experience of resisting separatism and extremism on its territory, above all in the Mediterranean island of Corsica. The Corsican national groups clashed with the French army in the middle 1970s. The Corsican Nationalist Union and the Movement for Self-Determination are the biggest and most influential among these groups. Both have combat units. In the last 25 years, the island's status was upgraded twice - in 1982 and 1990 the local authorities were given increasingly broad powers in the economy, agriculture, energy industry, transportation, education, and culture. Several years ago, French parliament recognized the existence of the Corsican nation. This decision was later cancelled as contradicting the Constitution of the French Republic.

The Breton Revolutionary Army (BRA) has operated in Bretagne, a north-western French province, since the early 1970s. The descendants of the Celts, who once came from the British Isles, do not identify themselves fully with the French, or consider themselves special among other French citizens. During censuses, many of them call themselves Bretons although put French as their native tongue. The BRA (apparently named by analogy with the Irish Republican Army - IRA) belongs to the extremist wing of the nationalist movement Emgann, which is fighting against the "French oppressors."

In Italy, the separatist attitudes are strong in the industrially advanced northern regions. The influential League of the North has so far given up its demand of secession and insists on Italy becoming a federation. There are also people wishing to see South Tirol, which Italy received after WWI, reunited with Austria.

Belgium may separate into northern Flanders (whose residents speak Dutch and are leaning towards the Netherlands) and southern French-speaking Wallonia. This confrontation between Belgium's two linguistic communities is rooted in the beginning of Belgium's independent history when the Walloons and the Flemish formed a union against the Netherlands. Having once united in the name of freedom, they have been trying to break apart for almost two centuries. Appeals for independence are growing stronger and stronger - the economically advanced Flanders does not want to "feed" the Walloon Region. The polls show that more than 60% of the Flemish and over 40% of the Walloons believe that Belgium may disintegrate.

In Britain, the separatist attitudes have moved from Ulster to Scotland. The recent Scottish parliamentary elections were won by the supporters of the formation of a new independent state from the Scottish National Party (SNP). The head of the Scottish government Alex Salmond declared that Scotland may become independent within a decade. So far, only 23% of Scots support the idea of their independence (as compared with 30% a year ago). However, the then Chancellor of the Exchequer Gordon Brown (the current British Prime Minister) warned in the press that Britain would be threatened with "Balkanization" if the 300 year-long union between England and Scotland continued weakening.

Denmark's Faeroe Islands are a semi-autonomous territory, living on the government's subsidies of almost $170 million a year. This fact is a restraint for the local separatists, although seven years ago they tried to conduct a referendum on independence.

Quiet Switzerland also has its own separatists. The Front for the Liberation of Yura has been demanding this canton's independence from the confederation for over 30 years. At one time, Yura inhabited by French-speaking Catholics was transferred to the canton of Bern with its predominantly German-speaking Protestant population. The Front's leaders admit that their chances of success are minimal.

Vojvodina is a Serbian autonomous region located some 35 km (22 miles) away from Belgrade. The Alliance of Vojvodina's Magyars, whose representatives control almost 70% of the region's territory, demand a republican status for the region, a referendum on secession from Serbia and a confederation with Hungary. Late last March, the Association asked the European Union to send a mission to study the situation. Hungarians now account for more than 40% of the region's population.

A similar scenario is developing in Romanian Transylvania (in 1940-1945 it belonged to Hungary; in 1919-1939 to Romania; and before that to Austria-Hungary). The percentage of Hungarians there already exceeds 45%. The Union for the Revival of Hungarian Transylvania, set up under Ceausescu, has already held referendums on territorial autonomy in three Transylvanian districts late last March. The local Hungarians expressed themselves for the maximal autonomy from Bucharest and independent relations with Budapest.

The "anti-colonial" raids have become more frequent in Italian Sardinia, and in the Austrian provinces of Stiria and particularly Carinthia, mostly populated by the Croatians and Slovenians. The South Albanian Greeks and the residents of the Portuguese Azores have also become increasingly active in demanding autonomy.

Kosovo, with a 90% ethnic-Albanian majority, has been formally recognized as a sovereign state by over 55 countries including the U.S. and most EU members since it proclaimed its independence from Serbia on February 17, 2008.