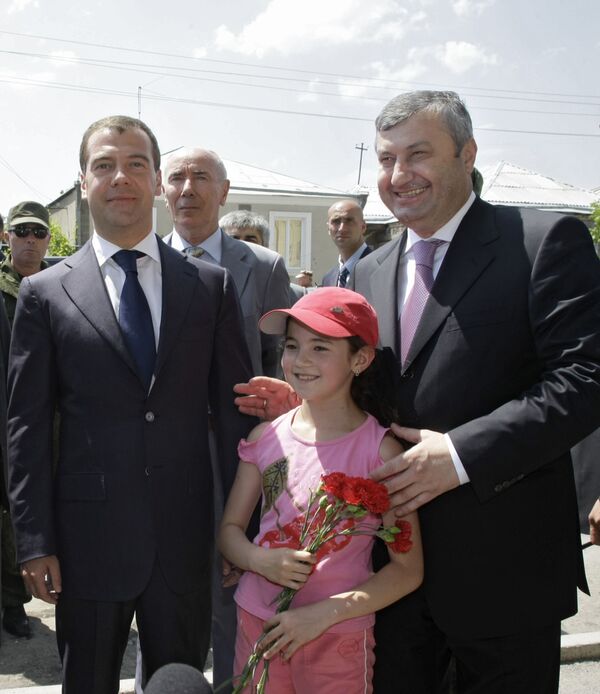 The president of the former Georgian republic of South Ossetia, Eduard Kokoity, told RIA Novosti on Thursday he does not believe that Georgia will attack his country in the future.

MOSCOW, July 30 (RIA Novosti) - The president of the former Georgian republic of South Ossetia, Eduard Kokoity, told RIA Novosti on Thursday he does not believe that Georgia will attack his country in the future.

Georgian troops launched an offensive on South Ossetia last August in an attempt to bring the former Georgian republic back until its central control. The move led to a five-day conflict between Tbilisi and Moscow, which recognized South Ossetia along with neighboring Abkhazia.

Since recognition of the two republics, Russia and Georgia have had no diplomatic ties.

"Taking into account the agreements signed with the Russian Federation, I would like to inform my compatriots that the situation will be normal. And at this time, I rule out any chance of aggression from Georgia," Kokoity said.

According to Kokoity, Georgia with the help of the United States, NATO, Ukraine, Israel and other countries, has re-equipped itself with weapons lost or destroyed after the August war.

"Georgia's army today is better equipped than in August 2008. Training exercises with NATO forces are regularly held and military specialists from NATO countries and the U.S. make regular visits," he said.

"However, [South Ossetia] and Russia are also not sitting idly by. Considering what happened in August 2008, we are also taking appropriate steps, meaning that we are arming ourselves," Kokoity said.

Russian envoy to NATO Dmitry Rogozin last week highlighted the danger of ongoing arms supplies and military aid to Georgia by other countries. "Georgia's ongoing militarization is dangerous as we know what it leads to," he said in an interview with Ekho Moskvy radio station.

He stressed that Russia would not hesitate to introduce sanctions against foreign firms that continue to provide military equipment to Georgia.

Russia has banned the exports of military products and dual-purpose technology to Georgia after the armed conflict. Under a presidential decree, effective through December 2011, Moscow is to restrict military cooperation with countries providing Georgia with weapons.

Commenting on the Russian envoy's statement, U.S. Ambassador to Russia John Beyrle said that Washington would continue military cooperation with Georgia, but it did not include heavy weapon supplies.

Moscow has also slammed Ukraine for arms supplies to Georgia. But a senior military official in Ukraine said early this month that the country would continue to fulfill contracts on weapons deliveries to Georgia until a UN Security Council ban was imposed.

The official dismissed allegations that Ukraine had delivered arms to Georgia illegally and free of charge during and after the conflict on orders from President Viktor Yushchenko.