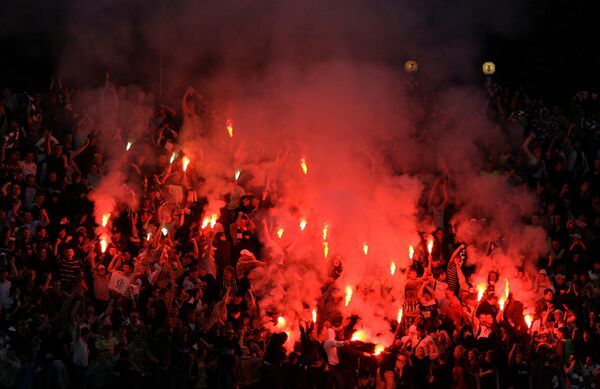 Dynamo Moscow got off to a perfect start in their first Champions League campaign, scoring an early goal and shutting out Celtic to win 1-0 in Glasgow.

MOSCOW, July 30 (RIA Novosti) - Dynamo Moscow got off to a perfect start in their first Champions League campaign, scoring an early goal and shutting out Celtic to win 1-0 in Glasgow.

The result, secured in front of a capacity crowd at Celtic Park, makes the Russians favorite to win the third qualifying round tie after the second leg in Moscow next Wednesday.

The visitors, 15 games into the Russian Premier League season, started strongly and went ahead in the seventh minute when star forward Alexander Kerzhakov made some space for himself down the left wing and crossed for 18-year-old Alexander Kokorin to poke home.

Celtic, who had not conceded a goal in four preseason games, struggled to come to terms with the pace of their first competitive game of the season, but began to create more as the half wore on.

The Muscovites defense was solid, however, and chances were hard to come by for the home side. The best was missed by new $6.2 million signing Marc-Antoine Fortune, who shot wide from close range when a low cross reached him at the far post.

The second half started with a spell of intense pressure from Celtic, with defender Denis Kolodin heading off the line from Australian forward Scott MacDonald. Dynamo weathered the storm and looked to break at every opportunity, twice threatening the second goal that would have effectively ended the tie.

In the closing minutes, substitute Georgios Samaras had a gilt-edged chance to lift Celtic spirits for the second leg, but sent his far-post header straight into the arms of Dynamo's outstanding goalkeeper, Vladimir Gabulov.

The Scots now travel to Moscow seeking their first away win in Europe since August 2003, but with Dynamo captain Dmitry Khokhlov returning from suspension they may have to wait a bit longer against continental opposition.

Tickets for the second leg at Khmiki's stadium just north of Moscow go on sale on Thursday at Dynamo Stadium, which is closed for reconstruction this season.