Tajikistan wants Russia to pay for military base 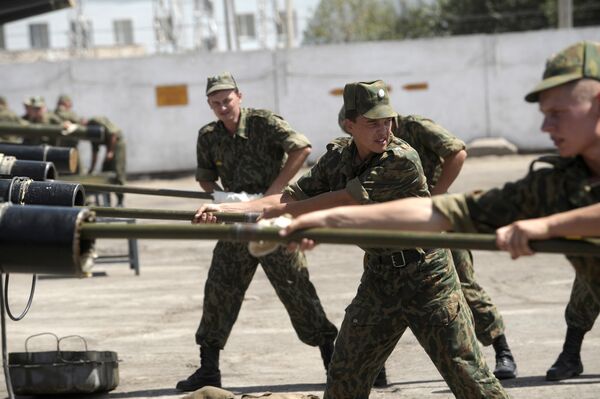 Subscribe
International
India
Africa
Tajikistan wants Russia to start paying to use a military base on its territory and also wants Russian border guards deployed in the country to leave, a leading business daily reported on Thursday.

MOSCOW, July 30 (RIA Novosti) - Tajikistan wants Russia to start paying to use a military base on its territory and also wants Russian border guards deployed in the country to leave, a leading business daily reported on Thursday.

Russian President Dmitry Medvedev is due to arrive in Tajikistan on a two-day official visit on Thursday to discuss bilateral military cooperation, the status of the Russian language in Tajikistan, as well as energy issues.

Kommersant reported that the issue of paying rent for the 201st military base had been raised by Tajikistan to try and find a bargaining chip with Russia in exchange for financial support amid the global economic downturn. Tajikistan has been badly hit by the slump in global prices for its main exports, cotton and aluminum.

"Threats of changing the status of our [military] base onto a paid basis...and other steps [President Emomali] Rakhmon has made, create objects for bartering with Russia, which he hopes he can swap for grants and loans," the department director of the Central Asian Institute, Andrei Grozin, was quoted as saying by the daily.

Grozin said that the collapse of Tajikistan's main exports has made the situation so dire, that Rakhmon has urged Tajiks to store up a two-year supply of food in preparation for hard times.

Russia currently deploys a military base near the Tajik capital, Dushanbe. The base is home to the 5,000-strong 201st motorized infantry division. It was established in 2005 to provide assistance to Tajik border guards protecting the Tajik-Afghan border.

Dushanbe is also threatening to ban the use of Russian in public institutions and official documents after criticizing journalists for their poor knowledge of Tajik. Rakhmon has said the ban will promote the development of Tajik and bolster patriotism in the country.

In the Soviet period, Russian was the lingua franca among the various ethnic groups in Tajikistan and other ex-Soviet republics. Many ethnic Russians have left Tajikistan since the breakup of the Soviet Union and the ensuing civil war, but Russian is still spoken by much of the indigenous population.

Russian is still an official language in Belarus, Kazakhstan, Kyrgyzstan, and it is also widely spoken in Ukraine and some other parts of the former Soviet Union.