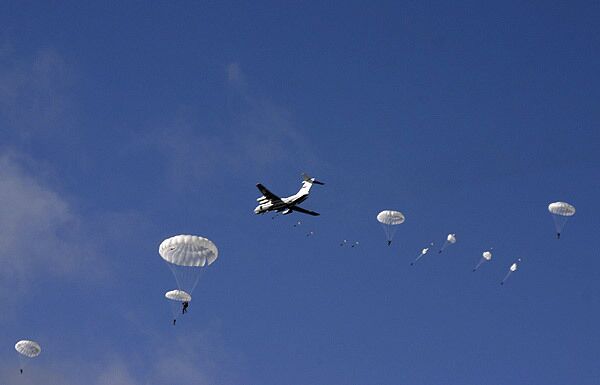 Subscribe
Russian paratroopers will receive new weaponry and equipment in 2009 to increase their effectiveness in light of the recent conflict with Georgia, the Airborne Troops commander said on Wednesday.

MOSCOW, July 29 (RIA Novosti) - Russian paratroopers will receive new weaponry and equipment in 2009 to increase their effectiveness in light of the recent conflict with Georgia, the Airborne Troops commander said on Wednesday.

"At the end of August we will receive a battalion of 10 Nona self-propelled guns and two fire-control vehicles," Lt. Gen. Vladimir Shamanov said.

"We will also increase the number of wheeled armored vehicles in service with the Airborne Troops," he said, adding that the modernized or even new tracked vehicles, including the latest BMD-4 airborne infantry vehicle, demonstrated limited mobility in the five-day war with Georgia last year.

The general said a wheeled armored personnel carrier can sustain substantial damage to its chassis and still continue to accomplish combat tasks, while a tracked vehicle losses the ability to maneuver if its tracks are damaged.

"We are planning to modernize and procure the TIGR armored multipurpose vehicle for our reconnaissance units," Shamanov said.

The commander also said that in line with current military reforms the Airborne Troops will have reconnaissance battalions armed with spy drones, and will soon adopt a tactical radio communications system with a range of 10 kilometers (6.2 miles).

"These are weapons and equipment which we certainly lacked in the first and second Chechen war, and in the five-day war [with Georgia]," Shamanov said.

The Airborne Troops are considered the most capable mobile assault forces in Russia. Various estimates put the current personnel at about 48,000 troops deployed in four divisions and a brigade.

According to Russia's military reform plans, the Airborne Troops will be fully manned by professional soldiers by 2011.