Repeat parliamentary elections in Moldova expected to be calm 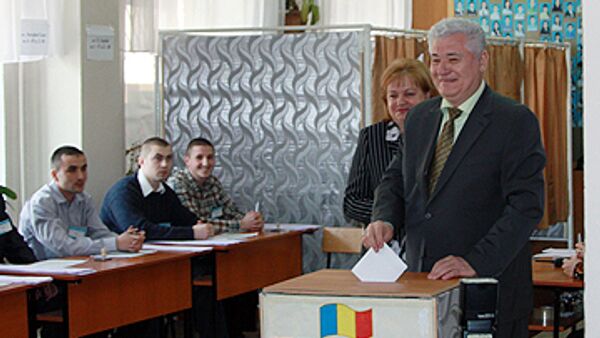 Moldovan President Vladimir Voronin believes the riots that followed April's parliamentary elections will not be repeated after the rerun of the vote on Wednesday.

CHISINAU, July 29 (RIA Novosti) - Moldovan President Vladimir Voronin believes the riots that followed April's parliamentary elections will not be repeated after the rerun of the vote on Wednesday.

Opposition protests against vote rigging in the parliamentary polls spiraled out of control two days after the April 5 election, when some 10,000 rioters broke into the presidential residence and parliament in the capital, Chisinau. Several hundred protesters and police were injured in the violence.

"I don't believe Moldova needs to go through the same scenario as on April 7, or that the country would support such a scenario and its citizens would agree with such a scenario," Voronin said.

Moldova's constitution required new elections be held after the parliament voted in on April 5 twice failed to elect a president.

The Communist Party, which garnered 60 seats in the 101-member parliament, failed to get former prime minister Zinaida Greceanii elected president. She fell one vote short of the required 61 as the opposition boycotted both ballots.

Voronin said that this time, if the "post-election situation slides toward the April 7 situation, police authorities will act accordingly."

Voronin said he was sure the Communist Party, which he leads, will win in the parliamentary elections.