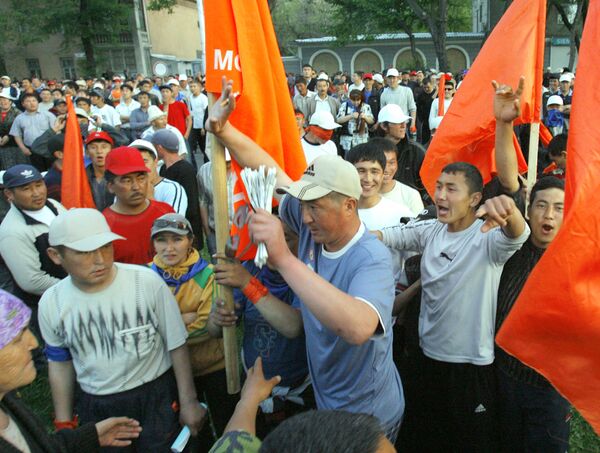 Kyrgyzstan's Central Election Committee confirmed incumbent President Kurmanbek Bakiev's victory in the polls with 76.4% of the vote in Thursday's election. Atambayev came in a distant second with 8%.

"The country's united opposition has called for all citizens to come onto the streets on July 29 for peaceful demonstrations, protests and other peaceful actions to protect our rights and freedom, in a protest against the unprecedented falsifications during presidential elections," Atambayev said at a press conference in the capital, Bishkek.

Atambayev said the protests would be continuous and would become "the beginning of a long and relentless fight against dictatorship and lawlessness."

Bakiyev, 59, came to power in 2005 after leading street protests that forced his predecessor, the long-serving Askar Akayev, into exile, but he has come under pressure over a perceived failure to tackle economic problems and increasingly authoritarian stance.

Organization for Security and Cooperation in Europe monitors in Kyrgyzstan said the presidential vote failed to meet international standards, and cited cases of ballot box stuffing, inaccuracies in the voter lists, multiple voting, and other irregularities.

The OSCE also said Bakiyev used administrative resources to ensure his reelection, and that campaigning in the Central Asian state was uneven, with candidates having unequal access to the media.

Observers from former Soviet republics said no major violations had been registered.