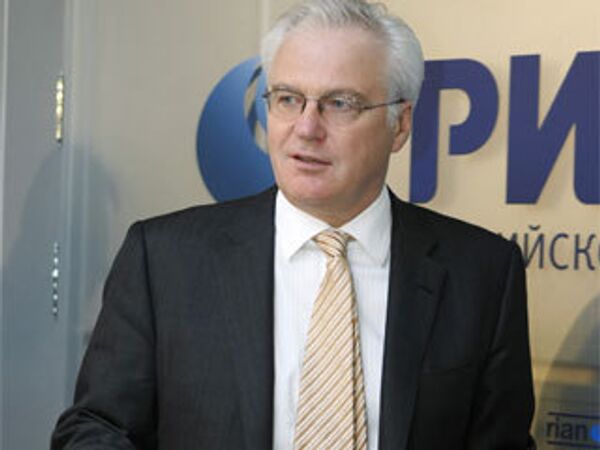 Russia is concerned about tensions rising in southern Lebanon, Russian UN Ambassador Vitaly Churkin said on Monday during a Security Council meeting on the situation in the Middle East.

The situation in southern Lebanon became tense on July 14 when an explosion occurred in the security zone near the Lebanese-Israeli border in the town of Khirbat Silim. Israel and the United States have said the explosion was set off by a detonator in a Hezbollah weapons store prohibited by the UN Security Council.

There have been flare-ups in the past week between UN peacekeepers and local citizens, including a stone throwing altercation that left 14 UN personnel lightly wounded.

"We are concerned with the outbreak of tension in Lebanon's south and welcome the efforts that are being taken currently by the Lebanese authorities in cooperation with the UN," Churkin said.

UN Security Council Resolution 1701, which brought an end to the war between Israel and Hezbollah forces in Lebanon in the summer of 2006, prohibits storing weapons in the security zone between the Litani River and the Blue Line, which is the Lebanese-Israeli border. The area is under the observation of UN Interim Force in Lebanon (UNIFIL).

Churkin said that "Russia continues to hold the position of rigorous support to the sovereignty, independence and territorial integrity of the Lebanese state," and that Moscow was satisfied with the successful parliamentary elections held in Lebanon last month.