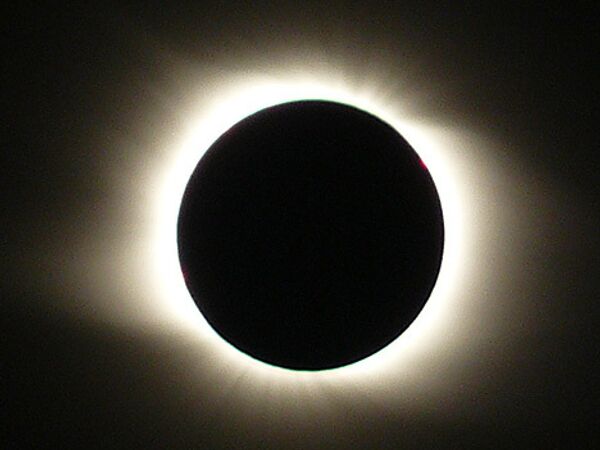 © Alexander Yarv
Subscribe
Wednesday's solar eclipse, visible in India, China and Japan, will be the longest in the 21st century.

MOSCOW, July 21 (RIA Novosti) - Wednesday's solar eclipse, visible in India, China and Japan, will be the longest in the 21st century.

On Wednesday at 00:53 GMT, the shadow of the moon will make a landfall on India's western coast, touch upon southern tips of Bangladesh and Nepal before engulfing most of Bhutan and racing across the Chinese mainland towards Japan's Ryukyu islands.

The phenomenon will also be partially seen in parts of Thailand, Indonesia and the Pacific Ocean. It will be completely over four hours later, when the shadow crosses the Pacific, almost reaching the southern American coast.

With the totality lasting up to 6 minutes and 39 seconds in the maximum eclipse point located southeast of Japan's Bonin Islands, Wednesday's eclipse will be the longest eclipse until June 13, 2132.

India's air force has allocated an AN-32 transporter and a Mirage-2000 fighter jet for scientists to study and take pictures of the event above the monsoon clouds, AFP said.

Amateur astronomers were given an opportunity to book a seat on a charter Boeing 737-700 flight to take off from New Delhi before dawn, Thaindian News reported. It will enter the moon's shadow at the altitude of about 12,500 meters (41,000 feet) and then follow its route until the western Indian state of Bihar.

Sun-side window seats were offered at $1,500, middle seats - at $1,218, others - at $600, with customers ranging from astronomers and photographers to a family on a mid-air picnic in the moon's shade.

All around the world, solar eclipses are widely seen as omens of violence, wars, outbreaks of disease and natural disasters.

Indian and Chinese astrologers predict outbreaks of violence during the forthcoming eclipse, particularly in southeast Asia. In India, expectant mothers are advised to stay indoors in order to avoid possible birth defects in their babies, and some of them even asked doctors to change the date of their caesarian section, AFP reported.

The eclipse will not be seen in Russia, but scientists from the Moscow Serbsky Institute for Social and Forensic Psychiatry said they would monitor calls on their hotline to study whether the eclipse will influence the number of people seeking psychological and psychiatric aid.

"We will study the number of calls on July 22, but I don't think there will be any difference," the center's deputy chief, Zurab Kekelidze, said.

He added that the forthcoming eclipse was too short to have an effect on a person's physical and mental health.