Eastern Europe as a U.S. problem 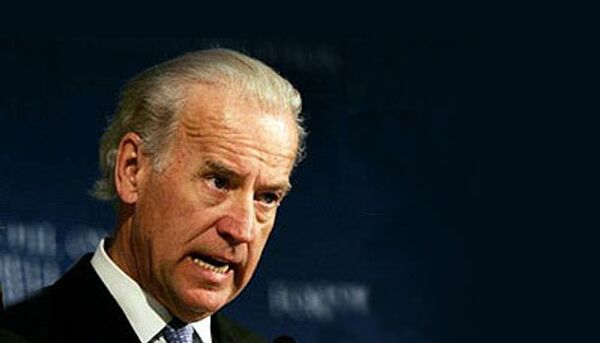 MOSCOW. (RIA Novosti political commentator Dmitry Kosyrev) - U.S. Vice-President Joseph Biden has begun his trip to Georgia and Ukraine amid an opening barrage in the media: an open letter from Eastern European leaders to the U.S. administration was followed by something like a response in the form of a Sunday editorial in The Washington Post.

These two documents can help us to understand Biden's Georgian-Ukrainian diplomacy for what it deserves to be. Namely, as an attempt by the new administration to start sorting out the substantive part of the U.S. foreign policy crisis. The name of this part is Eastern Europe.

Let us go back one year: at first European and American media stubbornly stuck to the version that the attacker was Russia. Then Europeans began to realize that the reality was something different. Simply, a small country with a regime established by the U.S. was pushing two world powers toward war, and this within Europe.

At the same time, Ukraine (the second stop in Vice-President Biden's trip) represented by President Viktor Yushchenko supplied the aggressor with arms, and did it in secret from most of the political establishment of his own country. And Eastern European leaders - on the whole the same people that are now writing letters to Washington - acted as the main advocates and activists of the policy of "protecting Georgia."

But that was no policy any more. It was a plot to take advantage of the United States, to engineer for it if not a war, then at least a mighty crisis - on top of all the others (Iraq and Afghanistan), and this ahead of presidential elections. Generally speaking, such things are never forgiven.

The letter penned by Eastern Europeans is a long document signed by former key leaders: Lech Walesa (Poland), Vaclav Havel (Czech Republic), Vaira Vike-Freiberga (Latvia), Valdas Adamkus (Lithuania) and many of the politicians. They call themselves the Atlanticists. They warn that U.S. popularity in their countries has waned, and new people are coming to power. The authors call for preserving this special link between Washington and the "new Europe," admitting Ukraine and Georgia into NATO, opposing Moscow's expanding influence, including by means of new pipelines bypassing Russia, and so on. Dmitry Medvedev's proposals concerning a new architecture for European security, they say, are plain horror that requires NATO's strengthening.

In general, this is an appeal to continue the policy Washington followed before Barack Obama, a policy that ended in the Georgian disaster.

Something similar is also taking place in the U.S. - a sharp ideological battle to mark out polar positions. It is led by neo-Conservatives, of the same mind with former Vice-President Dick Cheney, who are fiercely opposing even hints that Obama should pursue a foreign policy other than Cheney's. This is a rare situation in U.S. history, perhaps comparable only with the 1980s in the Soviet Union, years of ideological battles and attempts at renewal. And this dispute is only beginning.

Here is the message contained in The Washington Post editorial - a brief five-paragraph reply to the long message from Eastern Europeans. "The administration," the paper believes, "nonetheless should take the letter to heart, not as a rebuke but as encouragement. Nations clamoring for a stronger U.S. relationship, built on the ideals of freedom and alliance, are not so numerous that Washington can afford to take them for granted."

On the whole, the American thinking elite realizes that the former policy was unwise and dangerous. But the U.S. does not appear to have given rise to some new policy differing from the adventurism of the former administration and not being at the same time America's retreat.

In the same way, old-time thinkers in Eastern Europe are struggling to preserve the old line - no new Eastern European policy is in sight. And Russia, too, which has for many years been defending itself against the Bush-Cheney line, would do well by making its position clear not only on what it does not want its partners to do, but also on what it wants.