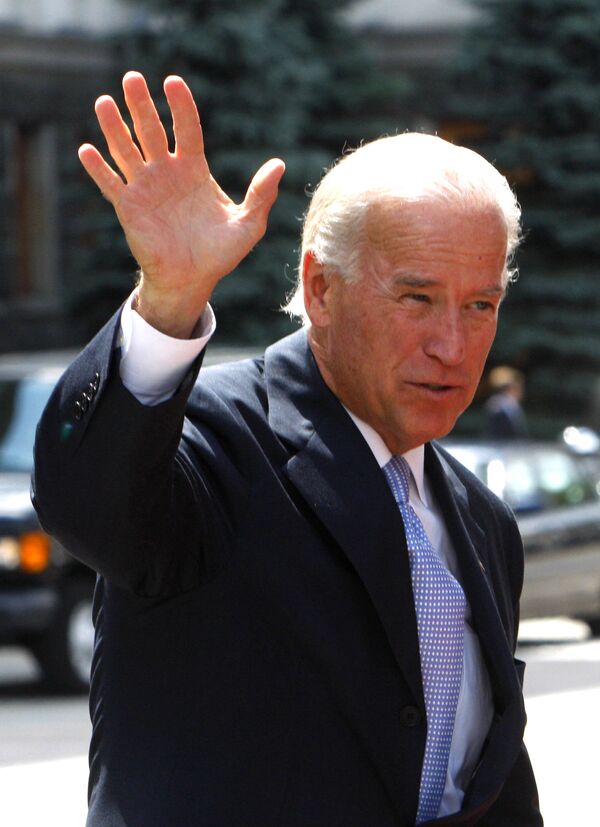 Subscribe
The U.S. vice president tours Ukraine and Georgia this week to persuade the two former Soviet states' embattled presidents not to cling on to power, a leading Russian daily said on Tuesday.

MOSCOW, July 21 (RIA Novosti) - The U.S. vice president tours Ukraine and Georgia this week to persuade the two former Soviet states' embattled presidents not to cling on to power, a leading Russian daily said on Tuesday.

"The central objective of Biden's trip is to prepare for the forthcoming changes of power in both republics, to look at the probable successors to the incumbent presidents of Ukraine and Georgia and, it would seem, to convince the latter to leave quietly," Kommersant said.

"He will probably not speak openly about his preferred political leaders, but will explain to both presidents that they should not cling on to power and should give it away to other people," the paper said.

Biden's national security aide, Tony Blinken, said ahead of the visits: "Our hope is that these leaders who really, many of whom were part of inspiring not only their own people, but the entire region, the entire world, not so very long ago, will live up to the promise of the revolution and make the hard choices and work together."

"In many ways, people in Ukraine, with this incredibly open and free and vibrant society, seem to be a little bit ahead of some of the political leadership right now, and we hope that the leadership will do just that - lead," Blinken said.

In Ukraine on Tuesday, Biden will meet with President Viktor Yushchenko and Prime Minister Yulia Tymoshenko, as well as key opposition leaders, who all plan to run in January's presidential elections.

Kommersant suggested opposition leader Arseniy Yatsenyuk, a potential leading candidate for president, was Washington's preferred next president of Ukraine. Biden's last meeting on Tuesday will be with Yatsenyuk, which means they could have extra time for talks.

In Georgia on Wednesday evening and on Thursday, the vice president will meet with President Mikheil Saakashvili, representatives from leading NGOs and opposition leaders, and will deliver a speech in parliament.

The paper said Saakashvili had preempted the tone of Biden's visit by moving to appease the opposition on Monday, proposing electoral and other reforms in a speech to parliament and calling for unity against the Russian occupier.

The opposition has held protests in Georgia demanding Saakashvili's resignation over a disastrous war with Russia last August and his totalitarian tendencies. But Saakashvili has said he will serve out his term, which ends in 2013.

"In Kiev and in Tbilisi, Joe Biden is expected to stress on many occasions that the U.S. is against any spheres of influence [for the United States or Russia], and the 'reset' of relations with Moscow does not mean Washington will sacrifice its warm ties with Georgia and Ukraine," the paper said.