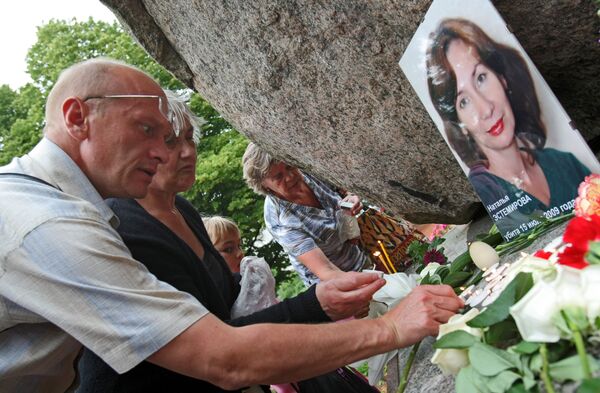 © RIA Novosti . Alexei Danichev
/
Go to the photo bank
Subscribe
Staff at Russian human-rights group Memorial will remain in the North Caucasus republic of Chechnya, but operations have been suspended following the killing of one its activists, the group's chairman said on Monday.

MOSCOW, July 20 (RIA Novosti) - Staff at Russian human-rights group Memorial will remain in the North Caucasus republic of Chechnya, but operations have been suspended following the killing of one its activists, the group's chairman said on Monday.

Memorial suspended its activities in the volatile republic last Saturday following the murder of human-rights activist Natalya Estemirova and cited a growing risk to its staff for the decision.

"Everyone remains in Chechnya," Oleg Orlov said that about 30 personnel at the Memorial office in Chechnya are on "temporary vacation."

He did not specify when the group would resume its work in the region, saying that "we will definitely convene to discuss this issue."

Memorial executive committee member, Alexander Cherkasov, was cited by Radio Free Europe on Monday as saying, "We are thinking about what to do in the future, how to help people in Chechnya, how to follow criminal cases that we helped to bring to court, and how to continue our work in compiling a list of missing people. At the moment, our work -- monitoring and documenting crimes that take place there -- happens to be gravely dangerous."

Estemirova, who had been investigating kidnappings and disappearances for Memorial, was abducted last Wednesday in the Chechen capital, Grozny, and later found dead in the neighboring republic of Ingushetia.

Estemirova had earlier worked with journalist Anna Politkovskaya, who was shot dead in Moscow in October 2006, and human rights lawyer Stanislav Markelov, who was killed in the Russian capital in January of this year. Both Politkovskaya and Markelov had been involved in investigations into human rights abuses in Chechnya.

The killing has been condemned by international groups. Reporters Without Borders said in a statement, "We salute the exemplary courage and commitment of this human rights activist and former journalist, we share the grief of her friends and family and we join them in honouring her memory."

Russia's North Caucasus has seen an upsurge in violence in recent months, despite the Kremlin's decision to end its 10-year counter terrorism operation in Chechnya.