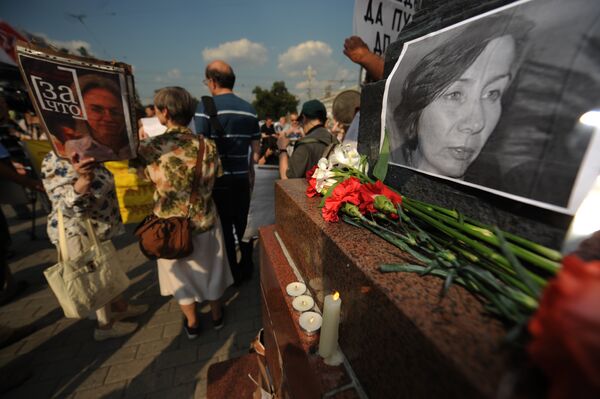 Estemirova, who had been investigating kidnappings and disappearances in Chechnya for the Russian human rights group Memorial, was kidnapped on Wednesday morning in Grozny. Her body was found with bullet wounds later in the day in neighboring Ingushetia. She was 50.

"As for the theories, I believe that those who committed this crime expected that the theories most primitive and unacceptable to the authorities would be put forward immediately," Medvedev said at a joint news conference with German Chancellor Angela Merkel in Munich.

The Russian president expressed his regrets in connection with this murder, adding that "it is obvious that her murder was directly connected with her professional activities."

"Her professional activities are necessary for any normal state, she was doing very useful things. She was telling the truth, she has openly and sometimes maybe even harshly evaluated certain processes in the country and that is why defenders of human rights are so valuable even if they are uncomforting and unpleasant for the authorities," he said.

The investigation committee at the Russian Prosecutor General's Office had already stated its assessment that Estemirova was killed for professional reasons. Russia's chief investigator, Alexander Bastrykin, has already arrived in Ingushetia.

According to Chechnya's investigation department, Estemirova had visited its offices the day before she was killed and had an appointment with the chief local investigator on the day of her murder.

The Parliamentary Assembly of the Council of Europe (PACE) said on its website on Thursday that Estemirova had been invited to speak before the Committee on Legal Affairs and Human Rights at its next meeting on September 11, 2009, at a hearing on the human rights situation in the Caucasus.