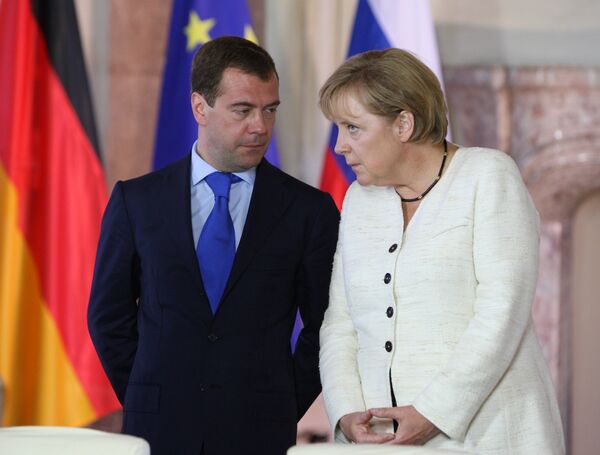 Russia is not jealous of the Nabucco natural gas pipeline project, President Dmitry Medvedev said at a joint news conference after talks with the German leader on Thursday.

MUNICH, July 16 (RIA Novosti) - Russia is not jealous of the Nabucco natural gas pipeline project, President Dmitry Medvedev said at a joint news conference after talks with the German leader on Thursday.

The Western-backed Nabucco project, estimated at 7.9 billion euros ($11 billion), is designed to pump Central Asian gas via Turkey to Austria and Germany through Bulgaria, Romania and Hungary, bypassing Russia.

"We are not jealous of Nabucco. Let it develop. If gas goes to Nabucco, then somebody clearly needs it, but nobody has made it clear to me where will it pump gas from," the Russian president said.

"This [Nord Stream] project should not be considered a rival to other pipelines," Merkel told reporters.

Turkey, Austria, Bulgaria, Romania and Hungary signed on Monday an intergovernmental agreement on the transit of Caspian gas to Europe. The sixth partner, Germany, did not sign the deal, since it is not a transit country.

Europe has expressed concern about its reliance on Russia, which meets a quarter of its gas needs. Calls for diversified supplies intensified following a bitter price dispute between Moscow and Kiev in early 2009, when Russia cut off gas to Ukraine, affecting consumers across Europe.

The South Stream project is designed to annually pump 31 billion cubic meters of Central Asian and Russian gas to the Balkans and onto other European countries, with the pipeline's capacity expected to be eventually increased to 63 billion cubic meters.