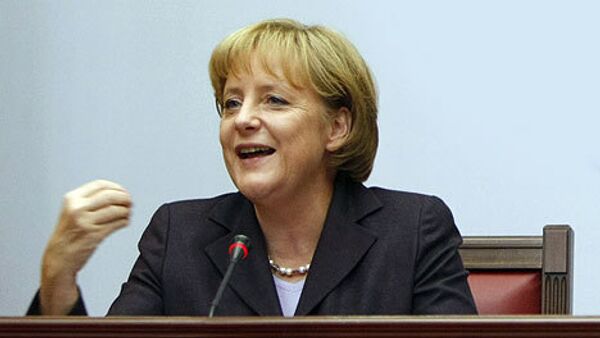 MOSCOW. (RIA Novosti political commentator Andrei Fedyashin) - German Chancellor Angela Merkel will celebrate her 55th birthday on July 17. Not that she is shy of her age, but being a woman, she is loath to announce it to the whole world.

MOSCOW. (RIA Novosti political commentator Andrei Fedyashin) - German Chancellor Angela Merkel will celebrate her 55th birthday on July 17. Not that she is shy of her age, but being a woman, she is loath to announce it to the whole world.

Indeed, you can find all that information on the Internet, where you can also read that she is preparing for and expects to win the Bundestag elections in September.

Angela Merkel was born Angela Dorothea Kasner in 1954 into the family of a Lutheran pastor, who that year received his pastorship near Brandenburg, 80 km (50 miles) north of Berlin in East Germany. She finished high school in East Germany and enrolled at the University of Leipzig, where she joined Freie Deutsche Jugend (FDJ), or Free German Youth, the official, socialist-led youth movement.

It was not simple being the daughter of a pastor in an officially atheist country. But Angela was an active supporter of the regime at school and the university, which she has since preferred to forget, saying that she was involved exclusively in "cultural work."

But there is nothing cultural in being a member of the FDJ district board and secretary for "Agitprop" (Agitation and Propaganda) at the Academy of Sciences. On the other hand, East German socialism was vastly different from the Soviet Union's socialism. Besides, Angela always leaned toward the other side and had been watched by the East German security police, the Stasi, for eight years.

After receiving a doctorate from the Central Institute for Physical Chemistry of the Academy of Sciences in 1989, the year when the Berlin Wall fell, she became a press secretary of the new pre-unification government under Lothar de Maiziere.

In 1990, Angela was elected to the Bundestag (parliament) from the Christian Democratic Union, Germany's largest conservative political party, and later became Minister for Women and Youth in Helmut Kohl's third cabinet. In 1994, she was made Minister for the Environment and Reactor Safety.

As one of Kohl's proteges and his youngest cabinet minister, she was referred to by Kohl as "das Maedchen" (The Girl).

In 1977, Angela Kasner married physics student Ulrich Merkel, but the marriage ended in divorce five years later. Her second husband is quantum chemist and professor Joachim Sauer, who prefers to keep out of the limelight.

Merkel's character and behavior have been seriously influenced by life in East Germany, which had its advantages and disadvantages. Fear that somebody will some day start suspecting her of pro-Communist ideas and "a bad past" forced her to develop a talent for maneuvering, making compromises, and knowing when to stop pressuring other people. She has honed the art of political maneuver to perfection, as otherwise she would not have been elected Germany's first female chancellor in 2005.

West Germans were prejudiced against East Germans, including Angela Merkel, seeing them as a special kind of Germans with closets full of skeletons.

She went to Moscow in 1978 after winning a Russian language contest. She is no longer fluent, but still understands Russian almost like a native.

Germans describe her policy as "moderate continental conservatism," as opposed to the British traditions of conservatism. However, the global financial crisis has added elements of state socialism to her policy.