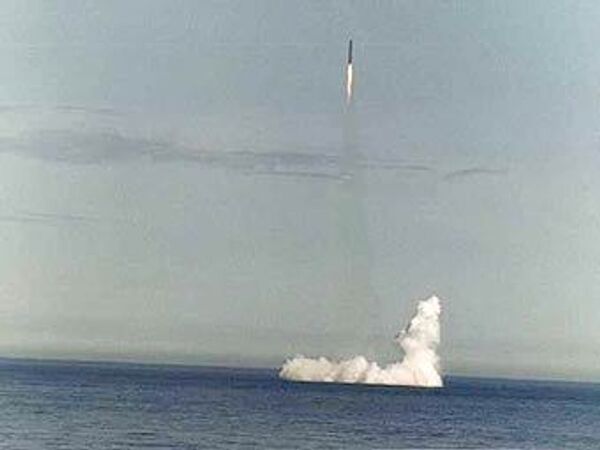 A recent mission involving launches of ballistic missiles from under ice proved the combat readiness of the naval component of Russia's nuclear triad, a high-ranking Navy source said Wednesday.

The United States was reportedly unable to detect the presence of Russian strategic submarines in the area before they launched the missiles.

"The accomplishment of this task confirmed the readiness of Russia's naval nuclear forces to respond adequately to any outside threat," the source said.

"Russian submarines not only fired ballistic missiles while submerged, they also did it from under ice floe near the North Pole, which proves that the Russian Navy has retained the capability of moving under Arctic ice and striking targets while undetected," he said.

A task force comprising several nuclear-powered attack submarines was deployed in the launch area to provide security for the two strategic submarines and help them avoid detection by U.S. defenses, the source added.

According to the source, the successful launches proved many skeptics in Russia and abroad wrong about poor combat readiness of the Russian Navy and its nuclear component in particular.

"We slapped these skeptics in the face, proving that Russian submarines are not only capable of moving stealthily under ice, but can also break it to accomplish combat tasks," he said.

"The combat readiness of the Russian Navy remains very high, and it has to be reckoned with," the source concluded.

A Russian intelligence source earlier said the region around the North Pole is the perfect place for launches of ballistic missiles because it allows the submarines to arrive in a designated area undetected and to shorten the missile flight time to the target.

The RSM-54 Sineva (NATO designation SS-N-23 Skiff) is a third-generation liquid-propellant intercontinental ballistic missile that entered service with the Russian Navy in July 2007. It can carry four or 10 nuclear warheads, depending on the modification.