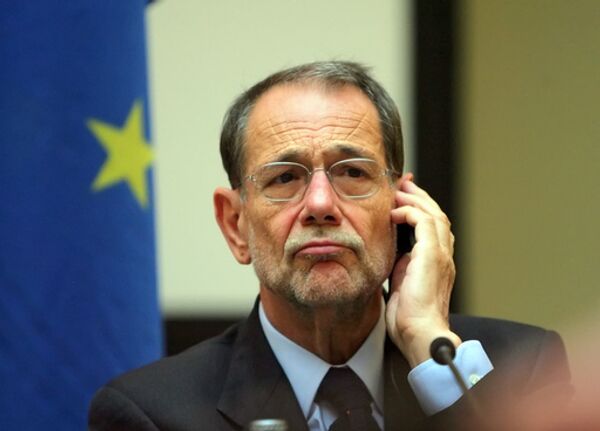 The European Union's foreign policy chief will visit Kosovo on Tuesday as part of his Balkan tour, to discuss strengthening ties with the former Serbian province.

SARAJEVO, July 14 (RIA Novosti) - The European Union's foreign policy chief will visit Kosovo on Tuesday as part of his Balkan tour, to discuss strengthening ties with the former Serbian province.

The diplomat will also attend a briefing delivered by Yves de Kermabon, who heads the European Union Rule of Law Mission (EULEX Kosovo), and will address EULEX staff members.

On Monday, Solana's spokeswoman Cristina Gallach called on Serbia to work more closely with EULEX in tackling crime, smuggling, and corruption in the Balkan region.

Solana visited Serbia and Macedonia on Monday, and will travel to Montenegro on Wednesday. The EU is currently considering starting visa-free travel with the three countries.

At a news conference in Skopje earlier on Tuesday, Solana confirmed that the long-awaited decision could be officially announced in Brussels on Wednesday, according to BalkanInsight.com.

According to EU officials, plans to facilitate travel to Europe for Kosovars are also being considered.

Solana's visit comes amid growing tensions among Albanian communities in southern Serbia, where two terrorist attacks have been carried out in the past two weeks. In the latest incident last night, two people were injured in Presevo.

So far 61 countries have recognized Kosovo as a sovereign state since it proclaimed independence from Serbia in February 2008. Russia and Serbia continue to consider Kosovo as a part of Serbia.