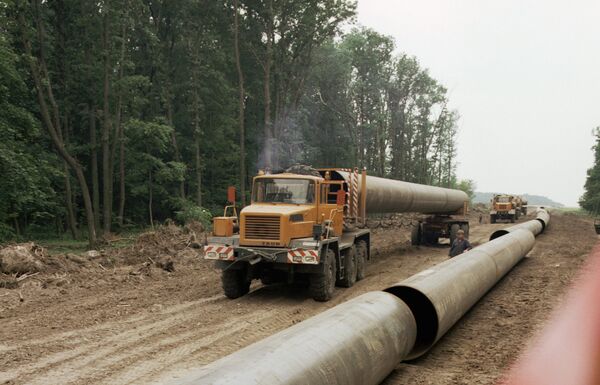 "We want Iran to join the project when conditions will allow, and also hope for Russia's participation in it," Erdogan said at a summit meeting in Ankara convened to sign an inter-governmental agreement on Nabucco.

Representatives of almost twenty countries, including European Commission President Jose Manuel Barroso, had come to Turkey for the signing ceremony.

The ambitious project, estimated at $7.9 billion, is designed to pump Central Asian gas via Turkey to Austria and Germany through Bulgaria, Romania and Hungary, bypassing Russia. Gas supplies through the pipeline are expected to start in 2014.

The project will be a continuation of the existing Baku-Tbilisi-Erzurum pipeline and is to transport 20 billion cubic meters of gas a year. Two-thirds of the pipeline will pass through Turkish territory.

Azerbaijan, Uzbekistan, Turkmenistan, Iran and Iraq are being touted as potential suppliers.

Erdogan called the signing of the Nabucco agreement an historic moment.

The Nabucco pipeline is seen as a rival to the Moscow-backed South Stream project designed to annually pump 31 billion cubic meters of Central Asian and Russian gas to the Balkans and on to other European countries, with the pipeline's capacity expected to be eventually increased to 63 billion cubic meters annually.

Europe has expressed concerns about being dependent on Russia, which supplies a quarter of its natural gas needs. Calls for diversified supplies intensified following a recent bitter price dispute between Russia and Ukraine in early 2009, when Moscow cut off gas to Ukraine, affecting consumers across Europe.

Moscow has argued, however, that South Stream and Nord Stream would cut EU dependence on transit states like Ukraine and improve European energy security.