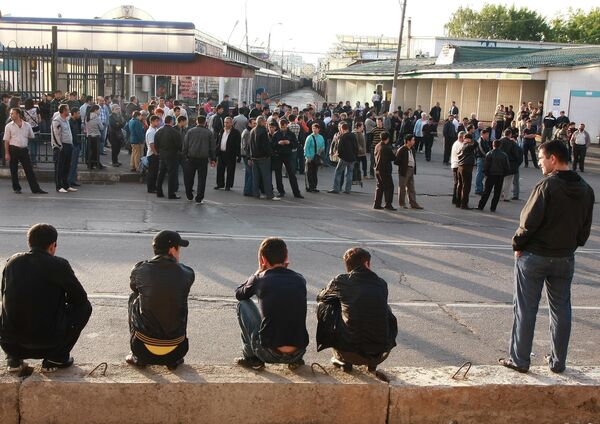 © RIA Novosti . Egor Slizyak
/
Go to the photo bank
Subscribe
More than 100,000 people have been left without work by the closure of one of Moscow's largest markets, the head of the Federation of Russian Immigrants said on Friday.

MOSCOW, July 10 (RIA Novosti) - More than 100,000 people have been left without work by the closure of one of Moscow's largest markets, the head of the Federation of Russian Immigrants said on Friday.

Madzhumder Muhammad Amin said at a RIA Novosti news conference that most of the immigrants employed at the market were facing difficulties.

"We will try to support them, especially as they ask us for moral and financial help," he said, adding that the federation would provide legal assistance to defend their rights.

Amin also said the organization had started fundraising to support the migrants. "We are asking all interested parties and authorities to render all necessary assistance to people who have got into difficulties," he said.

Earlier this week a court suspended the activities of five enterprises at the Cherkizovsky market. A series of checks revealed 464 violations of fire safety regulations, and criminal proceedings were initiated against 48 officials and 41 other people. The market was first ordered closed in 2007, but the closure was repeatedly postponed.

About 100 Vietnam and Chinese citizens tried on Tuesday to block Shchelkovskoye highway, an important Moscow arterial road, to protest against the closure of the market. Twenty-four protesters were arrested and given deportation orders for immigration violations, the Prosecutor General's Office reported.