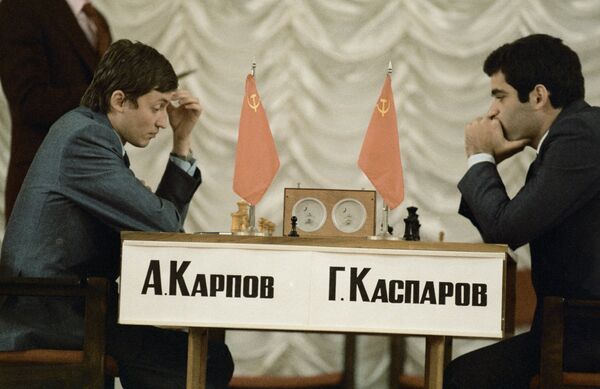 © RIA Novosti . RIA Novosti
/
Go to the mediabank
Subscribe
International
India
Africa
Russian chess legends Anatoly Karpov and Garry Kasparov are to renew their rivalry in a showdown in Valencia in late September.

MOSCOW, July 9 (RIA Novosti) - Russian chess legends Anatoly Karpov and Garry Kasparov are to renew their rivalry in a showdown in Valencia in late September.

Russian business daily quoted Valencia's chess federation as saying they would play a 12-game match between September 21 and 24 with four rapid games and eight blitz games.

The two men first played each other 25 years ago. However, the Spain event could be their last encounter.

Karpov has all but retired from tournaments, and Kasparov has officially quit chess to focus on politics.

The result of their first encounter, a five-month world championship epic struggle in 1984, was terminated by chess authorities due to the large number of draws. Their second meeting took place a year later in Moscow with a 23-year-old Kasparov defeating Karpov 13-11 to become the youngest world champion.

Grandmaster Narek Seferjan told RIA Novosti that the match could do much to help chess regain the popularity it enjoyed in the 1980s.

“In the 1980s, during those memorable matches between Kasparov and Karpov, chess was, I suppose, at its peak of popularity.”

“Chess lovers throughout the whole world are hoping that this upcoming encounter between the two great KAs will see a rebirth of chess,” he said.