Obama reaches out to Russia in keynote speech 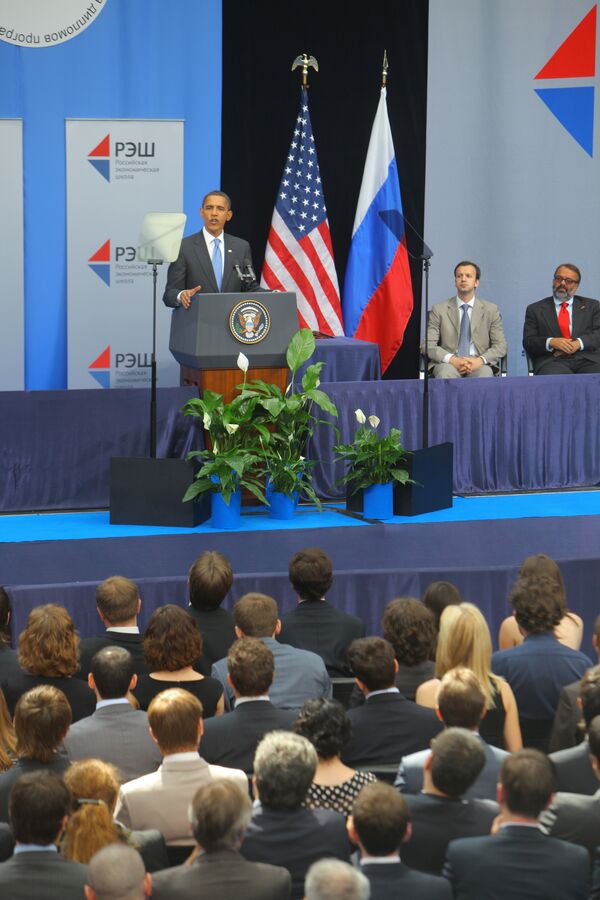 U.S. President Barack Obama called for a new start in relations with Russia in a speech in Moscow on Tuesday, straight after his first meeting with the Prime Minister Vladimir Putin.

MOSCOW, July 7 (RIA Novosti) - U.S. President Barack Obama called for a new start in relations with Russia in a speech in Moscow on Tuesday, straight after his first meeting with the Prime Minister Vladimir Putin.

"Let me be clear: America wants a strong, peaceful and prosperous Russia," Obama said during his half-hour speech at the New Economic School's graduation ceremony.

Obama's arrival at the ceremony was delayed after his visit to Putin's country residence over-ran.

Obama told the students that the future of Russian-U.S. ties did not lie in military confrontation.

"You get to choose where change will take us. Because the future does not belong to those who gather armies in the field or bury missiles in the ground. The future belongs to young people with an education and imagination to create as the source of power in this century.

He said the countries must work together to prevent the proliferation of nuclear weapons.

"Neither America nor Russia would benefit from a nuclear arms race in East Asia or the Middle East... That is why we should be united in opposing North Korea's efforts to become a nuclear power, and preventing Iran from acquiring a nuclear weapon."

On a key dispute between Moscow and Washington - the U.S. plans for a missile shield in Central Europe - Obama said the plans could be dropped if Iran abandons its military nuclear and missile programs.

"If the threat from Iran's nuclear and ballistic missile programs is eliminated, the driving force for missile defense in Europe will be eliminated."

On Monday, the first day of his visit to Russia, Obama met with President Dmitry Medvedev, and signed a framework deal on strategic arms reduction. Later on Tuesday, he is to meet with former Soviet leader Mikhail Gorbachev, and chess grandmaster and opposition activist Garry Kasparov, an outspoken critic of Putin.

Despite Obama's veiled criticism of Putin ahead of his visit, who he accused of having "one foot in the old ways of doing business and one in the new," the U.S. administration said Obama was impressed by his first impressions of the premier.

"I would say he's very convinced that the prime minister is a man of today and he's got his eyes firmly on the future," the Associated Press quoted an unnamed senior U.S. administration official as saying.

One of the key issues raised by Putin was Russia's objections to NATO's plans to admit Georgia and Ukraine.

"They spoke about Georgia and Ukraine, and about the post Soviet space in general. The U.S. president promised to take on board the specifics of our relations with these countries," Ushakov said.

The official said Putin explained the importance of the countries to Russia and its security, in particular Ukraine, "where 17 million Russians live."

"Putin put forward certain arguments, which I believe allowed Barack Obama to gain a better understanding of the situation," he added.

Obama later gave reassurances on the issue during his speech, saying: "America will never impose a security arrangement on another country," and that "for any country that applies to an organization like NATO, the majority of its people" must support the idea.

"But let me be clear: NATO must be seeking collaboration with Russia, not confrontation."

On the U.S. role in world affairs, he said the country did not seek to dominate other countries.

"No one nation can meet the challenges of the 21st century on its own, nor dictate its terms to the world. That is something that America now understands, just as Russia understands. That's why America seeks an international system that lets nations pursue their interests peacefully, especially when these interests diverge."