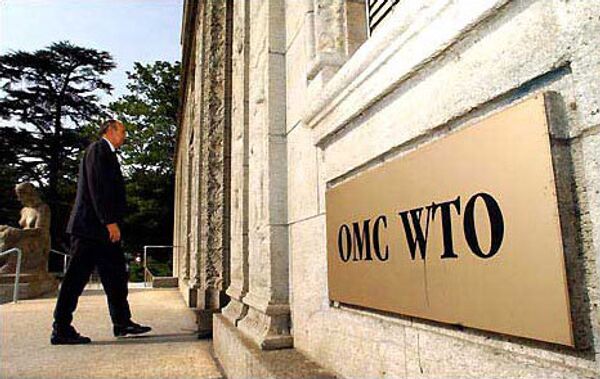 The Customs Union of Russia, Belarus and Kazakhstan could resume talks on joining the World Trade Organization in the fall, Russia's WTO negotiator has said.

MOSCOW, July 6 (RIA Novosti) - The Customs Union of Russia, Belarus and Kazakhstan could resume talks on joining the World Trade Organization in the fall, Russia's WTO negotiator has said.

Russia, Belarus and Kazakhstan earlier agreed to form a Customs bloc and seek joint accession to the WTO.

"There is no specific date yet but I think in September the meetings in Geneva will resume," Maxim Medvedkov said.

He added, however, that the process would take a long time and would not be completed "before the end of the year or even in a year," Medvedkov said.

This week the Union will start work on drafting a single policy on member states joining the global trade organization.

"We are currently at the stage of additional analytical work and internal consultations. This is because during the first round of our meetings in Geneva, the WTO members did not express a single option about how the accession of the Customs Union to the WTO would proceed. There are a lot of legal and technical aspects," Medvedkov said.

Medvedkov said that the members of the Customs Union had taken time out to clarify a number of points and to discuss the results of bilateral talks with the WTO before a decision on joint accession was made.

Medvedkov also said that Russia wanted to preserve as much as was possible the results of WTO negotiations prior to the decision on joint accession.