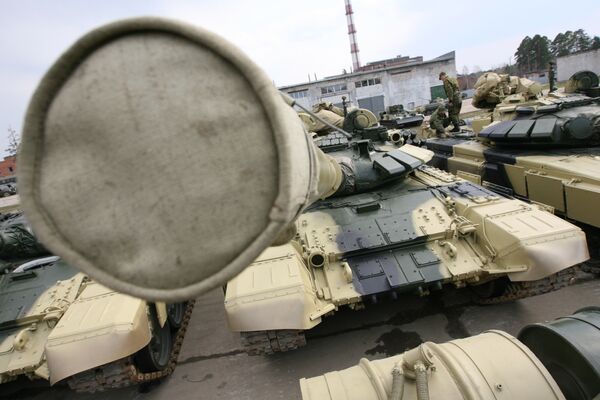 © Pavel Lisitsin
/
Go to the photo bank
Subscribe
Ukraine sold $800 mln worth of weaponry to foreign states in 2008, 14% more than the previous year, the head of the state arms exporter has said.

MOSCOW, July 2 (RIA Novosti) - Ukraine sold $800 mln worth of weaponry to foreign states in 2008, 14% more than the previous year, the head of the state arms exporter has said.

"Our arms exports were worth $700 mln in 2007, and totaled about $800 mln last year," Sergei Bondarchuk, general director of the Ukrspetsexport company, said in an interview with the Segodnya newspaper.

According to Bondarchuk, the increase was due to Ukraine's expanded presence on global arms markets. The country recently signed a contract worth $400 mln on repairs and modernization of An-32 Cline planes.

The official confirmed that Ukrspetsexport continues to fulfill contracts on weapons deliveries to Georgia.

"We continue to fulfill contracts earlier signed with Georgia, and will do so until the UN Security Council adopts a decision to ban the supplies," he said.

A Ukrainian parliamentary commission led by an opposition lawmaker said last December that President Viktor Yushchenko had sanctioned arms deliveries to Georgia during and after the Caucasus state's war with Russia in August.

Russia has banned exports of military products and dual-purpose technology to Georgia. Under a presidential decree, effective through December 1, 2011, the Russian government is to introduce restrictions on military cooperation with countries supplying Russian or Soviet-made arms to Georgia.