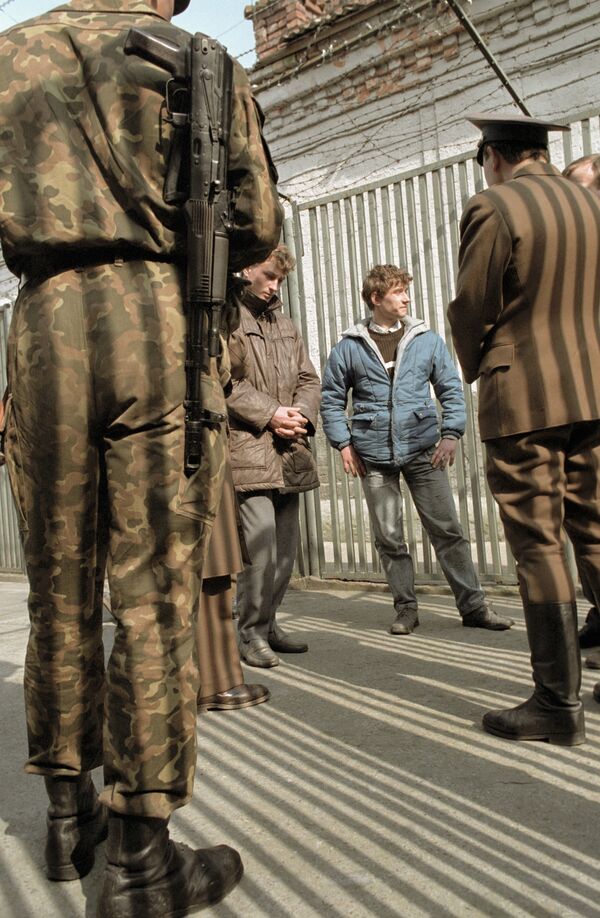 © RIA Novosti . Vladimir Vyatkin
/
Go to the photo bank
Subscribe
Russia's Defense Ministry said on Thursday they were holding talks with Georgia on the return of a soldier who requested political asylum in Georgia after leaving his post at a Russian base in South Ossetia.

MOSCOW, July 2 (RIA Novosti) - Russia's Defense Ministry said on Thursday they were holding talks with Georgia on the return of a soldier who requested political asylum in Georgia after leaving his post at a Russian base in South Ossetia.

"Dmitry Artemyev left the military base in the village of Perevi on July 1," the ministry said confirming earlier Georgian reports. "The serviceman crossed the Georgian-South Ossetian border and asked Georgian authorities for refugee status."

"Russian Defense Ministry officials have launched talks with the Georgian side," the ministry said adding that "the motives behind and the circumstances of the incident" were being investigated.

The foreign, interior and refugee ministries also said no discussions were ongoing.

Georgian media quoted Artemyev as saying that he had been treated badly in his unit.

"I have been treated extremely badly. I have fled the Perevi base," Artemyev said in a televised interview.

The Caucasus state's refugee ministry said earlier on Tuesday that Artemyev had already been granted the status of an asylum seeker.

This is the second time since January that a Russian soldier has deserted his unit in South Ossetia, a former Georgian breakaway republic, and requested asylum in Tbilisi. Jr. Sgt. Alexander Glukhov was given refugee status and a job in Georgia in late June.

Russia's military initially said Glukhov had been seized by Georgian secret services and forcibly taken to Tbilisi. But Glukhov denied the claims, saying he had fled due to the intolerable conditions in his unit.

Russia and Georgia fought a five-day war last August which began when Georgian forces attacked South Ossetia in a bid to bring it back under central control. Two weeks after the end of the war, Russia recognized South Ossetia and Abkhazia, another former Georgian republic, as independent states.