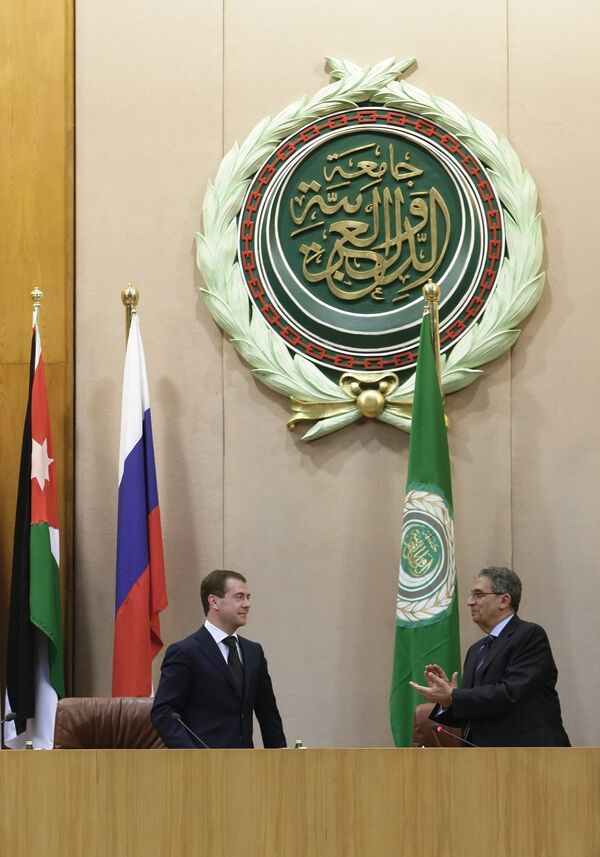 © POOL
/
Go to the photo bank
Subscribe
All parties, including the new Israeli government, have agreed to attend the Middle East peace conference due to be held in Moscow by the end of 2009, the Russian president said on Tuesday.

CAIRO, June 23 (RIA Novosti) - All parties, including the new Israeli government, have agreed to attend the Middle East peace conference due to be held in Moscow by the end of 2009, the Russian president said on Tuesday.

"Today we received formal confirmation of attendance from all parties concerned, including the new Israeli government, and I will be pleased to greet the high-ranking representatives from your countries in Moscow," Dmitry Medvedev said in an address to the Arab League.

Russia, the United States, the European Union and the United Nations comprise the Middle East Quartet of intermediaries seeking to resolve the Israeli-Palestinian conflict.

Medvedev said earlier on Tuesday that negotiations on the Middle East issue were complicated and Russia appreciated Egypt's backing for the Moscow conference.

Russia has been seeking to host Middle East peace talks for more than a year, but despite repeated statements of support from the Quartet nothing has developed.

Russian Foreign Minister Sergei Lavrov said in May 2008 that Russia was ready to host a conference last summer, but added that Israel had doubts about how quickly such a gathering should be convened.

Talks between Israel and the Palestinian Authority launched after a peace conference hosted by then U.S. President George Bush in November 2007 made little progress and were comprehensively ended by an Israeli offensive on Gaza in December that left 1,300 Palestinians dead and 5,000 injured.

The Hamas and Fatah movements, the largest political organizations in Palestine, split in June 2007 when Hamas took control of the Gaza Strip and pushed the Fatah movement out of the enclave of 1.5 million. Hamas has since remained in power in Gaza, independent of the officially recognized government of Fatah in the West Bank, which is headed by Palestinian President Mahmoud Abbas.