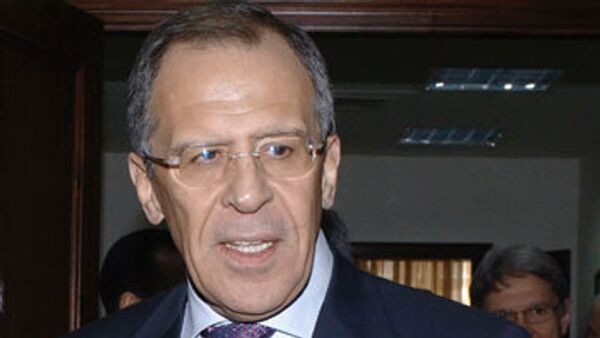 Sergei Lavrov said there was an obvious link between strategic arms reductions and any missile defense system in Central Europe, adding that "this link is also acknowledged by Washington."

He said a new arms reduction treaty between Russia and the United States required a joint search for "points of convergence."

"This position is shared by the presidents of our two countries," Lavrov said.

President Dmitry Medvedev said on Saturday that any arms cuts would only be possible if the United States alleviated Russia's concerns over the defense shield, which is planned to comprise a radar in the Czech Republic and 10 interceptor missiles in Poland.

The third round of comprehensive Russia-U.S. talks on a new strategic arms reduction pact opened on Monday in Geneva.

The Strategic Arms Reduction Treaty (START 1), which expires in December 2009, obliges Russia and the United States to reduce nuclear warheads to 6,000 and their delivery vehicles to 1,600 each. In 2002, a follow-up agreement on strategic offensive arms reduction was concluded in Moscow. The agreement, known as the Moscow Treaty, envisioned cuts to 1,700-2,200 warheads by December 2012.

Medvedev and U.S. President Barack Obama agreed to launch the discussions during their first meeting, in London in early April.