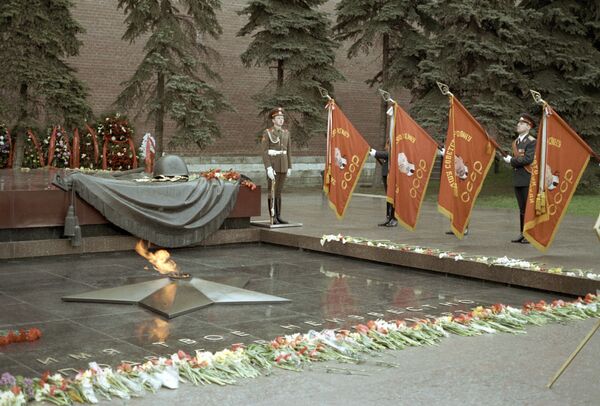 Russia remembers on Monday the start of the 1941-1945 Great Patriotic War, the term used in Russia and other ex-Soviet states to describe WWII.

MOSCOW, June 22 (RIA Novosti) - Russia remembers on Monday the start of the 1941-1945 Great Patriotic War, the term used in Russia and other ex-Soviet states to describe WWII.

The war, planned to be a matter of months, lasted for four years and became the world's bloodiest conflict in history. At least 26.5 million Soviet civilians and soldiers died during the conflict, according to official statistics.

Veterans, survivors, officials, and scores of younger people are visiting war memorials in Russia's major cities. In Moscow, people have been laying flowers and lighting candles in Victory Park, the center of annual Victory Day celebrations.

President Dmitry Medvedev, along with visiting Moldovan leader Vladimir Voronin and other top officials, has laid a wreath of flowers at the symbolic Tomb of the Unknown Soldier by the Kremlin wall.

Senior members of the Communist Party laid flowers at the graves of Joseph Stalin and top war-time commanders.

Russians were invited to light candles on their windowsills at 4:00 a.m., the time of the start of the invasion, in a campaign launched by the ruling United Russia party and supported by the Orthodox Church.

The pro-Kremlin youth group Nashi (Ours) said 10,000 people would gather on Vorobyovy Hills in Moscow's southwest later on Monday, to tie bells to trees and light candles to form "an alley of memory" in the park.

"Let's not forget that it [the war] is part of our history. I love you, grandmas and grandpas," famous pop singer Vladimir Presnyakov said in his video address.

"I want to remind you all that...on June 22 we must all remember those people who made our days so bright and sunny," said 2008 Eurovision winner Dima Bilan.

Events planned by another Kremlin-backed group include pickets near the embassies of Estonia, Latvia and other former Soviet republics which Moscow has accused of "distorting history" by "glorifying" former Nazi fighters and persecuting Red Army veterans as war criminals. Activists said they would play war-time air raid alerts in front of the embassies.

The war started with Russia badly disadvantaged as the Red Army was poorly armed, and most of its professional commanders had been executed or imprisoned during the 1937-1938 Stalinist reprisals. Stalin, who was caught unaware despite repeated intelligence warnings, only made his first address to the nation almost two weeks after the war was unleashed.

The anniversary of the attack was not officially marked until the 1990s. It is now officially named the Day of Memory and Sorrow. National flags are flown half mast in Russia and other former Soviet states on this day and light entertainment programs are forbidden.

"The day reminds us of those who perished, who were tortured to death in Nazi prisons, died of starvation and other hardships. We mourn for those who gave their lives fulfilling their duty to protect the Motherland," an official statement on the establishment of the holiday said.