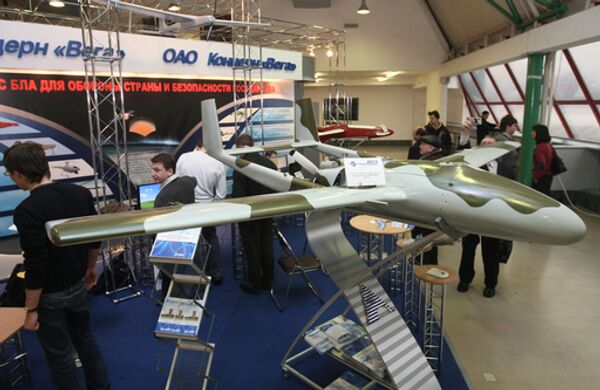 Russia has bought 12 unmanned aerial vehicles from Israel in a recent deal worth $53 million, a Russian government official said on Monday.

"The contract envisions the purchase of 12 UAV, including two heavy vehicles and 10 small vehicles. The delivery has not yet been made because the contract was signed only recently," Vyacheslav Dzirkaln, deputy head of the Federal Service for Military-Technical Cooperation, said in an exclusive interview with RIA Novosti.

Dzirkaln said the main goal of the purchase was to study the Israeli achievements in the development of spy drones in order to build reliable UAVs domestically.

"We must take their know-how and put it to practical use [in developing our own craft]," the official said.

The Russian military stressed the need to provide its Armed Forces with advanced means of battlefield reconnaissance in the wake of a brief military conflict with Georgia last August, when the effectiveness of Russian military operations was severely hampered by the lack of reliable intelligence.

The Russian Air Force has launched a number of UAV development programs for various purposes. Air Force Commander, Col. Gen. Alexander Zelin said last year that Russia would deploy advanced unmanned aerial vehicles (UAV) with a flight range of up to 400 kilometers (250 miles) and a flight duration capability of up to 12 hours by 2011.

However, Russian defense companies, including the Irkut aircraft maker and the Vega Radio Engineering Corp., have failed so far to provide the military with effective spy drones.

According to various estimates, the Russian military needs up to 100 UAVs and at least 10 guidance systems to ensure effective battlefield reconnaissance in case of any military conflict.