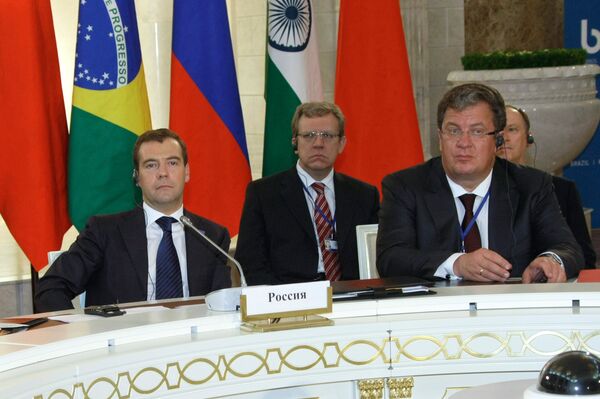 Russian President Dmitry Medvedev said in the wake of the summit that the event was aimed at promoting a fairer world order.

The BRIC nations currently account for 15% of the global economy and 42% of global currency reserves. These are important reasons for BRIC to have ambition to influence international economic and financial policies.

According to many estimates, emerging economies will the driving force of the expected global economic recovery – that is, they will bail out wealthier nations. Citigroup’s chief executive Vikram Pandit said at the St Petersburg International Economic Forum in early June that “China, India and Russia will become the engine of world growth for a while.”

Most estimates put China’s and India’s 2009 GDP growth at 6% and 4%, respectively, while the Group of 7 will still be in recession. The two fastest growing modern markets, China and India, are not heavily dependent on exports to industrially developed countries, but are developing independently due to booming internal demand.

Emerging economies linked to developed ones by currency and trade

However, most economists are convinced that emerging economies, BRIC countries included, are unable to develop independently of the industrialized nations. International trade and the global currency system are reportedly the two key reasons behind this unbreakable bond.

The need to reform the existing system of monetary management was a key issue in the run-up to the Yekaterinburg summit. All the BRIC countries put forth their own proposals about how to decrease the role of the weakened U.S. dollar in international trade and finance.

One proposal was to boost the role of SDRs (Special Drawing Rights), an international reserve asset issued by the IMF; another, a broader use of regional reserve currencies and their combinations; or the use of their own currencies for bilateral settlements.

However, shortly before the event, its participants seemed to recall that they kept a large portion of their currency reserves in dollar assets, and those assets’ further depreciation was the last thing they wanted.

Jim O'Neill, chief global economist at Goldman Sachs, who invented the term BRIC in 2001, has issued several forecasts since on the time these countries’ aggregate GDP exceeds that of G7, with each forecast putting the date closer. The latest one says this will happen by 2027, less than 20 years from now.

China’s economy will exceed the U.S. in size at about the same time, O'Neill predicts.

At the same time, however, the BRIC group has major discrepancies between its members. China and India are expected to show substantial growth even in 2009, the year marked by the deepest global recession. Brazil’s economy will be in stagnation, posting a 1% GDP decline, according to the same estimate, while Russia will suffer a deep fall, by over 6%.

Indeed China and India have objectively better prospects than Russia and Brazil. This difference is due to higher diversification of the two leading BRIC economies.

“China’s and India’s development is fuelled by a steadily growing internal consumer demand and state investment,” Maxim Simagin, analyst at the Alfa Capital asset management company, told RIA Novosti. “Russia and Brazil are two export-oriented, commodity-based economies. Brazil’s economy is even more diversified than Russia’s because the latter is heavily dependent upon exports of natural gas, oil, metals and fertilizers, while Brazil has in addition a developed financial sector, agriculture, manufacturing and services,” he added.

The term BRIC primarily refers to the ever-growing clout of the world’s largest emerging economies, not to a political bloc. Therefore, that the group’s members are developing at different rates does not mean this new driving force of the global economy is going to become weaker.