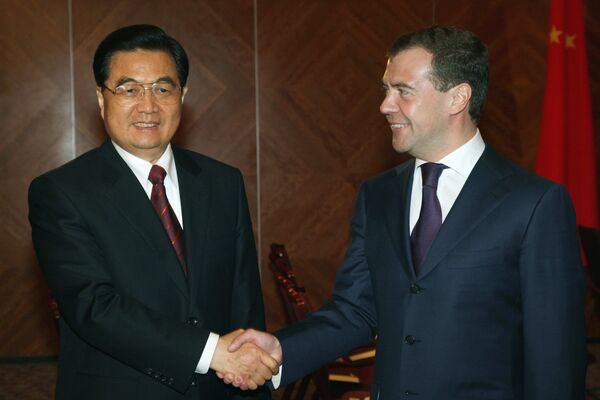 In 2008, Russian-Chinese trade reached a record $56.8 billion, although volumes were down slightly in early 2009 due to the financial crisis.

"We will do our best to maintain the tempo of economic cooperation this year and to minimize the impact of the crisis," Medvedev said.

Putin said he was certain that the current global credit crunch would not negatively affect cooperation between the two countries.

"Despite the global financial and economic crisis, relations between our countries have been unaffected by any political or economic conditions," Putin told the Chinese leader.

In turn, Hu praised Russian-Chinese partnership and strategic cooperation as "a worthy example of relations between large countries."

Russia and China signed a memorandum on cooperation in the natural gas sector after the talks.

Russia plans to establish a system of gas production and supplies, including to China and other Asia-Pacific markets, in East Siberia and the Far East. Russian Deputy Prime Minister Igor Sechin said in May that Russia was prepared to supply China with as much gas as it needs.

However, a senior executive at Russian energy giant Gazprom said earlier on Wednesday that Russia would not start natural gas deliveries to China in 2011 as planned, because the parties had yet to agree on a price.

"Talks are ongoing. No price agreement has been reached yet, there can be no talk of 2011," Alexander Avanenkov, a deputy board chairman, said.

Sechin also said Russia and China would hold intergovernmental talks to outline areas of bilateral cooperation in the gas sector in October.

Moscow and Beijing also signed a memo of understanding on cooperation in the coal sector, and another memo was signed between Russia's Renova and China National Gold Group Corporation.

Russia also committed itself to taking part in the construction of the second leg of the Tianwan nuclear power plant and the project to build a fast neutron reactor. Bilateral cooperation in the nuclear sphere has been recognized as an economic priority by both Russia and China.