Moscow and Beijing to talk about Pyongyang and Obama 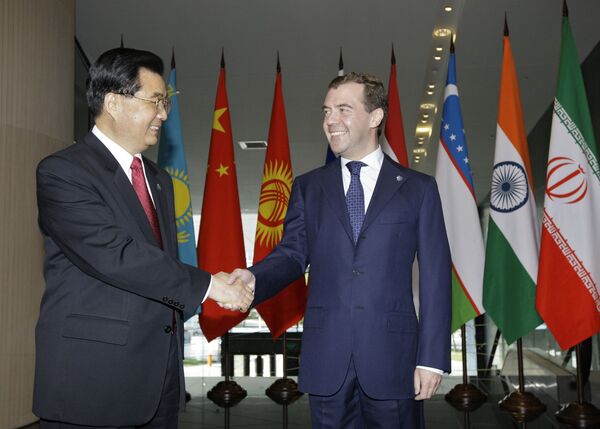 It is hard to find two other top leaders who would meet more often than those of Russia and China.

MOSCOW. (RIA Novosti political commentator Dmitry Kosyrev) – It is hard to find two other top leaders who would meet more often than those of Russia and China.

They attend at least two summits per year, plus the inevitable G8 summer meeting (Russia is a member of the club and China is always invited), and plus the summits of the Shanghai Cooperation Organization (SCO), where the two countries discuss their common policy in Central Asia. There are also regular telephone conversations.

This time, the SCO summit will take place in Yekaterinburg, and immediately upon its completion, on June 16-18, Chinese President Hu Jintao will pay a visit to Moscow to hold talks with President Dmitry Medvedev and Prime Minister Vladimir Putin. Yekaterinburg will also play host to a BRIC meeting.

The Russian-Chinese agenda has two clear-cut parts. The first concerns bilateral relations with a focus on trade and economic contacts, and the second involves cooperation on the global scene, or foreign policy.

The biggest problems between Russia and China concern trade and economic ties. These problems are virtually insoluble because of the two countries’ economic models.

China is primarily interested in Russia as a source of raw materials. This is why Russia is getting benefits from China even during the economic downturn. As The Washington Post wrote, Russia and China had signed a $25 billion energy deal. This is a bigger sum than any other Chinese partner will get. The bulk of this money will be spent on funding the project of the Chinese extension of the Pacific Oil Pipeline.

Trade between Russia and China will go down, primarily because of a sharp drop in prices of oil, non-ferrous metals, fertilizer, timber and timber materials. These raw materials dominate in Chinese imports from Russia as distinct from high tech commodities. The latter’s share continues to dwindle, and the political will of the leaders cannot change anything in this respect. China does not want what the Russian economy has to offer in this sphere.

It will be hard to break the deadlock in bilateral military-technical cooperation unless Beijing agrees to stop the practice of copying Russian technologies and selling them abroad under a different name. This is a serious problem, which is permanently discussed at top level.

As for foreign policy, there are practically no problems. The two countries merely need to coordinate their positions on key issues. They do not have to make concessions to each other because they have common interests as it is.

Two problems will move to the fore at the Russian-Chinese summit – relations of both capitals with the new U.S. president, and policy towards their common neighbor North Korea, which has pushed itself into an even bigger isolation than a year ago.

In effect, these two issues boil down to a single problem because the only way of breaking the North Korean deadlock lies through immediate and unconventional U.S.-North Korean contacts. Obviously, Russia and China will be happy to help this happen.

As for President Barack Obama, Moscow will see him first. A Russian-U.S. summit is due to take place in early July. Moscow and Beijing agree that friendship with the new U.S. president is a good thing. All that remains is to discuss the details – how to be friends and how to avoid getting in each other’s way. This will be done during the Chinese president’s upcoming visit to Russia.