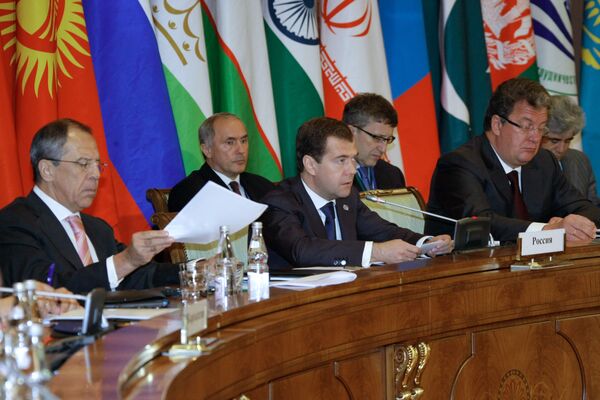 Russia's president urged on Tuesday for documents to be drawn up, setting out rules for admitting new members to the Shanghai Cooperation Organization (SCO).

YEKATERINBURG, June 16 (RIA Novosti) - Russia's president urged on Tuesday for documents to be drawn up, setting out rules for admitting new members to the Shanghai Cooperation Organization (SCO).

Speaking at a summit of the regional group in the Urals city of Yekaterinburg, Dmitry Medvedev also said member states should use their national currencies in mutual trade.

"We need to speed up work on the draft documents regulating the admission of new members to the organization... We have been discussing the issue, and are unanimous on this," he said.

Iran and Pakistan, observer nations in the group along with India and Mongolia, have asked for full membership. Russian officials have said the group's enlargement is held back by lack of admission rules, but China has warned against excessive expansion, saying it could hinder cooperation.

The SCO was set up as a security group, but has increasingly encompassed economic and energy projects. The alliance is seen as a counterbalance to U.S. interests in energy-rich Central Asia.

Medvedev said the group seeks to bolster its position and strengthen partnerships with other countries and organizations.

The SCO is to decide on granting a partner nation status to Belarus and Sri Lanka at the summit, he said.

On the issue of national currencies, Medvedev said the share of sovereign currencies in mutual trade should be increased to reduce dependence on international reserve currencies, and suggested that regional countries invest in each other's financial instruments.

"We must strengthen the international currency system not only by strengthening the dollar's positions, but also by creating new reserve currencies and possibly by eventually creating supranational payment instruments and means of settlements," he said.

China has recently argued against a new supranational reserve currency that would cut reliance on the U.S. dollar.