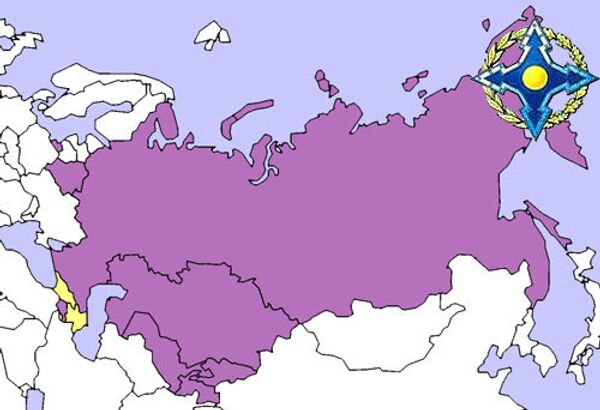 © http://ru.wikipedia.org/
Subscribe
The leaders of the post-Soviet CSTO security bloc have signed an agreement on creating a joint rapid-reaction force without a signature from Belarus, Russian President Dmitry Medvedev said on Sunday.

MOSCOW, June 14 (RIA Novosti) - The leaders of the post-Soviet CSTO security bloc have signed an agreement on creating a joint rapid-reaction force without a signature from Belarus, Russian President Dmitry Medvedev said on Sunday.

Belarus pulled out of the summit of the Collective Security Treaty Organization comprising Armenia, Belarus, Kazakhstan, Kyrgyzstan, Russia, Uzbekistan and Tajikistan in protest against Russia's ban on imports of its dairy products.

"The document that has been signed includes an agreement on collective forces and a decision by the Collective Security Council on the rapid-reaction force structure," Medvedev said.

Russia already has joint military contingents with Belarus and Armenia through the CSTO.

The CSTO rotating presidency, which was expected to be assumed by Belarus, has been passed over to Russia for the time being, Medvedev said.

"In the absence of our Belarusian partners, we have made a decision to pass temporary presidency to Russia as the country hosting the summit," Medvedev said.

The Russian president said that Minsk could join the CSTO summit's decisions later, adding that such a move would be welcomed.

Belarus earlier said no summit decisions would be valid without its involvement.

The Belarusian Foreign Ministry said in a note handed to the Collective Security Treaty Organization's secretariat that the country's non-participation "means the lack of approval from the Republic of Belarus of decisions being considered" at the summit, along with the foreign and defense ministers' meetings, and "consequently a lack of consensus for the taking of these decisions."