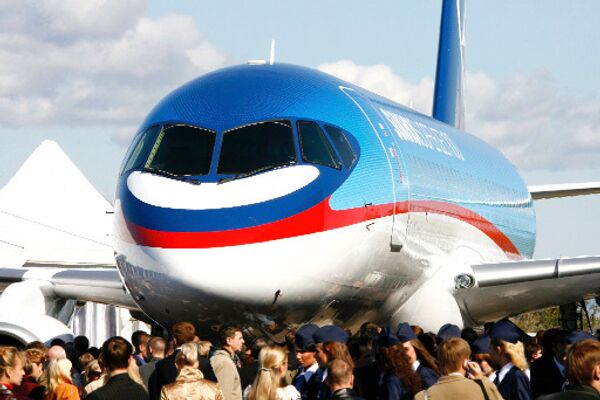 Russia will focus on the promotion of its new Superjet 100 passenger airliner at Le Bourget 2009 air show, a Russian business daily said on Thursday.

The 48th Paris Air Show at Le Bourget on June 15-21, which marks 100 years of technological innovation in aeronautics and space conquest, will be the first chance for most aviation enthusiasts to get a look at the new plane.

Superjet 100 will be the only flying model among the Russian aircraft displayed at the show in order to draw all public attention to the plane, the Vedomosti newspaper cited Russian aircraft industry sources as saying.

The plane has already landed at Le Bourget, and will be making daily demonstration flights during the show.

The first Superjet 100 aircraft has already made several long-distance and 40 short-distance test flights, clocking over 100 flight hours. A total of four planes will take part in the Russian certification program, which should be completed in the third quarter of 2009.

International certification is expected by mid-2010.

Sukhoi, part of the United Aircraft Corporation (UAC), plans to manufacture at least 700 Superjet 100s, and intends to sell 35% of them to North America, 25% to Europe, 10% to Latin America, and 7% to Russia and China.

The company earlier said it had about 100 solid orders for the Superjet 100 so far and planned to sign a new deal during the Le Bourget air show for 20 additional planes, worth an estimated $600 million.

Armenia's national airline, Armavia, will most likely be the first country to receive a Superjet 100, followed by Russian flagship carrier Aeroflot.