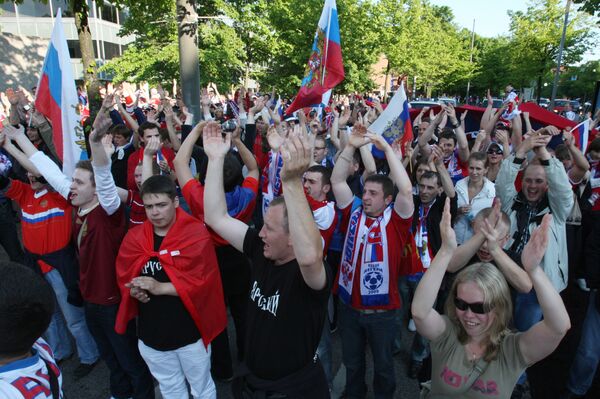 © RIA Novosti . Alexei Danichev
/
Go to the photo bank
Subscribe
Russia’s most complete performance since their Euro 2008 quarterfinal win over Holland saw Guus Hiddink’s side beat Finland 3-0 in Helsinki on Wednesday evening to move a step closer to the 2010 World Cup.

MOSCOW, June 11 (RIA Novosti) – Russia’s most complete performance since their Euro 2008 quarterfinal win over Holland saw Guus Hiddink’s side beat Finland 3-0 in Helsinki on Wednesday evening to move a step closer to the 2010 World Cup.


Playing in front of a large and vocal contingent of Russian fans, the Euro 2008 semifinalists made all the early running, dominating play in the first 25 minutes, with Dynamo Moscow’s Alexander Kerzhakov and CSKA Moscow’s Yury Zhirkov going close.

It was Kerzhakov, back in the side after more than a year out of the national team, who eventually broke the deadlock, rounding Jussi Jaaskelainen to slot in the first after a delicate lobbed pass by Arshavin.


The goal was the first at international level for the former Sevilla striker, left out of the Euro 2008 squad despite being Russia’s top scorer in qualification, since September 2007.


Bystrov, a surprise start in midfield, made up for his earlier miss after the break, weaving through the defense and shooting, his effort pushed out by Jaaskelainen to the grateful feet of Kerzhakov for Russia’s second in the 53rd minute.


Any chances of a Finnish comeback were killed off 18 minutes later, a perfectly executed run and finish by Zyranov making it 3-0. Zyranov’s goal, during which he outfoxed the experienced Liverpool defender Sami Hyypia, was the final straw for a large section of the home support, who made an early exit as soon as the ball hit the back of the net.


“Tomorrow we will wake up and remember this – it will be a morning of football joy!” enthused the state-run Channel One commentator.

The 3-0 win, a repeat of last autumn’s result, leaves Russia a point behind Germany in second place after six games in Group 4. The Germans visit Moscow on October 10. The first placed team in the group qualifies automatically for the 2010 World Cup, to be held in South Africa. The second-placed side will face a play-off match.