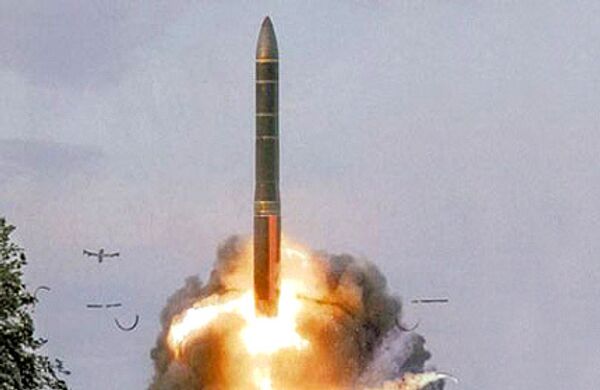 U.S. media reports have suggested the Pentagon is considering the possibility of arming ballistic missiles with conventional precision-guided warheads.

He said the existing missile attack warning systems were unable to distinguish between a nuclear and conventionally armed ballistic missile, adding that a state receiving real-time data about a missile launch would proceed from the "worst-case scenario."

With insufficient time for analysis of response options, that "could place mankind on the verge of a nuclear catastrophe," the general said.

He also said that any new strategic arms deal with the United States had to take into account the minimum requirements of Russia's strategic nuclear forces.

Solovtsov said Russia "must not go below the level of 1,500 nuclear warheads, but that is up to the country's political leadership to decide."

Under the Strategic Arms Reductions Treaty (START I), which expires on December 5, Russia and the United States are to reduce their nuclear warheads to 6,000 and their delivery vehicles to 1,600 each. In 2002, a follow-up agreement on strategic offensive arms reduction was concluded in Moscow. The agreement, known as the Moscow Treaty, envisioned cuts to 1,700-2,200 warheads by December 2012.

Russian President Dmitry Medvedev and U.S. President Barack Obama agreed during their London meeting in early April on an immediate start to talks on a new strategic arms reduction treaty.

Russia, which proposed a new arms reduction agreement with the United States in 2005, expects Washington to agree on a deal that would restrict not only the numbers of nuclear warheads, but also place limits on all existing kinds of delivery vehicles.