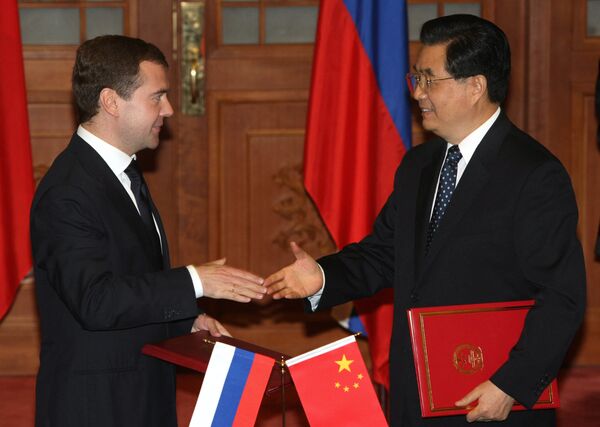 On June 15, Hu will attend a Shanghai Cooperation Organization meeting involving Russia, China and four ex-Soviet Central Asian states, and on the following day will take part in a summit of BRIC countries (Brazil, Russia, India, China). Both summits will be held in the Urals city of Yekaterinburg.

"The development of cooperation between BRIC benefits the four countries as well as contributing to the revival of the world economy," Deputy Foreign Minister He Yafei said. "We also share positions on many issues, and the countries' roles in the world, including in political affairs, is growing."

He said the leaders would discuss the global recession, reform of the global financial system, food security, and further dialogue between the BRIC nations.

The BRIC countries' foreign ministers met in Yekaterinburg in 2008. The meeting was widely seen as attempt to build a political alliance.

The Goldman Sachs economist who coined the term BRIC in 2003, Jim O'Neill, told Reuters last week that the four countries are likely to increase their share of the global economy faster than previously expected, due to the financial crisis.

The agenda of the Chinese leader's state visit, starting on June 14, also includes meetings with President Dmitry Medvedev, Prime Minister Vladimir Putin and the speakers of the upper and lower houses of parliament, the diplomat said.