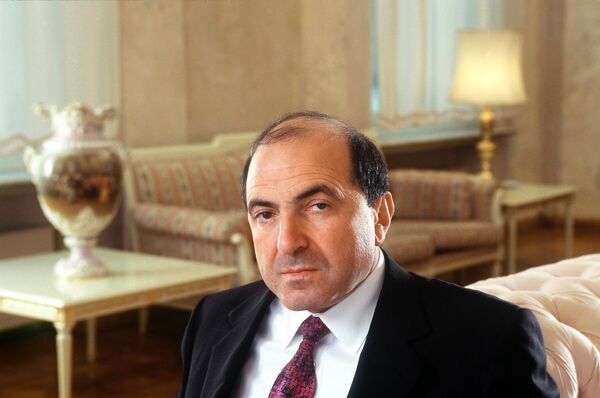 © RIA Novosti . Sergey Guneev
/
Go to the mediabank
Subscribe
International
India
Africa
The prosecution is demanding that fugitive Russian tycoon Boris Berezovsky be given a 15-year prison term in absentia for his part in embezzling 140 million rubles ($4.5 mln), a court-appointed lawyer said on Tuesday.

MOSCOW, June 9 (RIA Novosti) - The prosecution is demanding that fugitive Russian tycoon Boris Berezovsky be given a 15-year prison term in absentia for his part in embezzling 140 million rubles ($4.5 mln), a court-appointed lawyer said on Tuesday.

"During a court hearing today, a public prosecutor asked the court to sentence Berezovsky in absentia to 15 years in prison, and another person involved, Yuly Dubov, to nine years," the fugitive court-appointed lawyer, Valery Doronin, said.

Doronin said that he had requested the charges be dropped as "there was no evidence of Berezovsky's guilt."

Investigators allege that Berezovsky, who now lives in the U.K., and other members of his criminal gang used the proceeds from car sales to acquire stock in reputable companies, real estate, and for other personal needs.

Berezovsky's personal lawyers earlier said that their client was against them participating in the trial. The state appointed a public-defense lawyer to represent the fugitive oligarch in court.

Prosecutors claimed it had established that contrary to the terms of a contract, Berezovsky's gang failed to pay for 5,560 vehicles supplied, and used an estimated $24 million for their own needs.

Investigators also said they had established that Berezovsky spent part of the money on a 14.3-hectare plot of land in the Krasnogorsk district northwest of Moscow for his daughter.

Over a dozen criminal probes have been launched in Russia against Berezovsky, a one-time close associate of late president Boris Yeltsin, including plotting to stage a coup and embezzling $13 million from a leading Russian bank.

Russia has issued multiple warrants for Berezovsky's arrest and has repeatedly demanded his extradition from Britain, where he was granted political asylum in 2000.