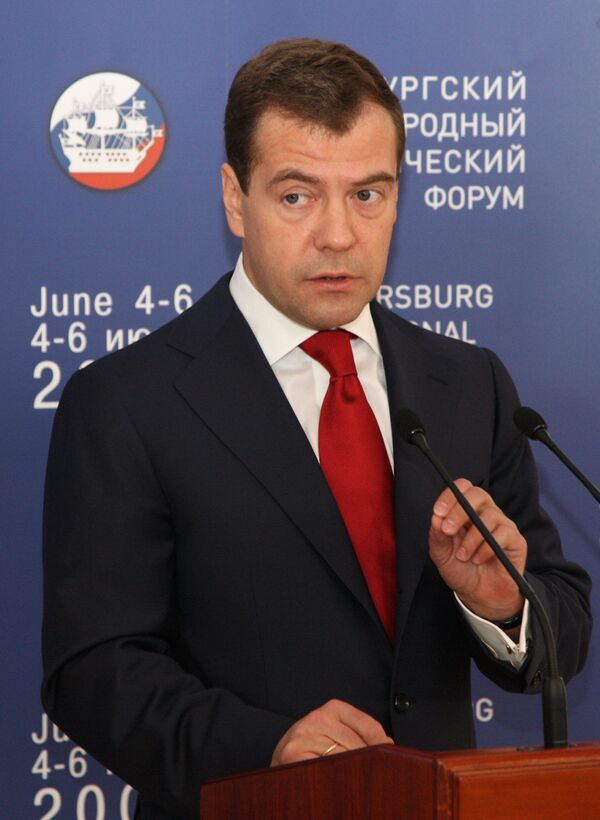 Russian President Dmitry Medvedev said Saturday that tendencies in the global economy are irreversible, and that fast developing markets, including Russia, will quickly overcome the financial crisis consequences.

"I am convinced that global tendencies in the world economy are irreversible. And we should have no doubts that the development of the world economy will now occur in line with this scenario and not some other one," he said at the St. Petersburg International Economic Forum.

"I hope that the Russian economy, as a fast developing market, will overcome its problems a bit more quickly that we probably hope today, but it should certainly be a result of joint efforts," he said.

Medvedev told representatives of international corporations and banks that the tax reporting system in Russia would be changed for the better.

"It is evident that it [the system] should be improved," he said after foreign businessmen complained of a too bulky system of tax reporting in Russia, when documents containing thousands of pages should be submitted to fiscal bodies.

"This is unfortunately what characterizes our tax system, and what we should change," Medvedev said, adding that he hopes the international system of tax reporting and accounting will also be made in line with present-day realities.

"It is no secret that one of the reasons for the crisis is imperfection of international audit, accounting and reporting," he said.

Medvedev said Russia should use the opportunities provided by the economic crisis to make innovation development in the country stable.

"Unfortunately, the transfer of our economy to the innovation scenario is not successful yet," he said. "There could be no other situation so good to try to transfer the economy to innovation tracks, hold technological modernization."

The Russian leader said the state funds worth about 12% of GDP, allocated to support the country's economy, should be used effectively.

"The volume of funds to support the economy, to overcome crisis phenomena, to resolve problems with liquidity, support the banking system, to support the real sector for Russia is unprecedented - it is about 12% of GDP, and certainly it is very important for us that this money is used correctly," he said.