A brainstorm is expected in St. Petersburg 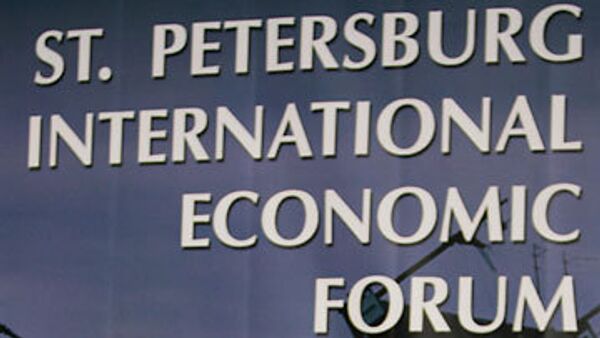 The 13th International Economic Forum will be especially important as it is going to be held in the heat of a global recession, Ms Matviyenko said.

"Nevertheless, this will not prevent the participants from fulfilling their own mission, that is to brainstorm for reasons behind the global financial meltdown, as well as ways out of it and means to work out some common solutions," she added.

The St. Petersburg Economic Forum is often compared with Davos. This is not entirely correct, Ms Matviyenko said, since the St. Petersburg forum after many years has already grown into its own international brand with an established audience.

"This time around, we are in for significant, high-level discussions, despite the crisis - or maybe thanks to it. The forum participants and guests will include heads of state and government, respected politicians, heads of major global companies, banks and leading economists from many countries. Each day's agenda will be busy and of great interest," she went on.

In her words, various business meetings and discussion sessions will take place simultaneously at various locations; a large number of bilateral and multilateral international agreements and direct contracts are expected to be signed.

The St. Petersburg governor will also be particularly busy during the event.

"We have scheduled a commissioning ceremony of the Nissan plant in St. Petersburg for June 2. Incidentally, the project broke ground during one of the earlier forums.

"Then we are also signing a major St. Petersburg SME support agreement with the Economic Development Ministry. Under the agreement, the federal government and the city budget will each provide 250 million rubles for this purpose. This project will benefit over 7,000 local residents who wish to start a business, providing them with startup subsidies of up to 300,000 rubles.

"I also have a series of meetings and talks with regional governors, and heads of major financial and other businesses," Ms Matviyenko said while sharing her plans.

When asked by Kiev reporters about the current economic ties between St. Petersburg and the Ukrainian capital city and regions, Ms Matviyenko said:

"We expect a high-ranking Ukrainian delegation to attend the forum. Ukraine has always been an important participant in the event. Since the forum was established, St. Petersburg has signed a number of important mutually beneficial agreements with Ukraine's capital and other Ukrainian regions. Many businesses, including banks and companies, have signed direct contracts, and so did the two chambers of commerce and industry. And this cooperation potential is not yet fully used," the governor said.

However, in her words, Russian-Ukrainian economic cooperation has been down in recent times. This is not only due to the global recession, but also to the general political situation.

This economic forum will also be different because it will "glide smoothly into the World Grain Forum," Ms Matviyenko remarked. The idea was initiated by President Dmitry Medvedev and supported by more than 40 countries, including major producers and consumers of food grade grain.

The grain forum is expected to explore the possibilities of creating an OPEC-style international grain producers group, Ms Matviyenko said while underlining that the proposal to hold the World Grain Forum in St. Petersburg had been initially voiced in this city.

In addition to the span of business and political meetings, the organizers plan to impress the forum participants and guests with additional activities involving dozens of local museums, concerts and exhibitions, and other sights that Russia's second-largest city is renowned for.