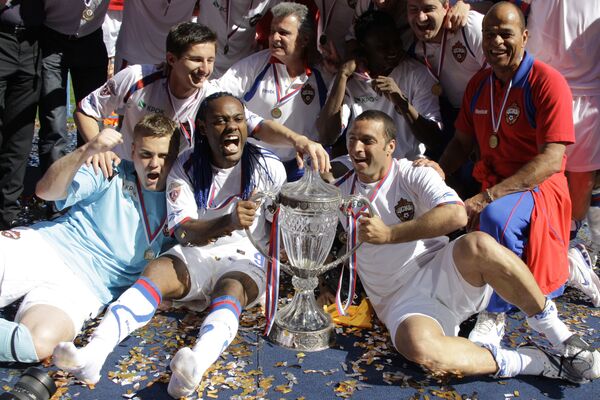 CSKA won the game with Yevgeny Aldonin scoring one minute into added time, even though the Moscow club was reduced to 10 players in the 13th minute after midfielder Pavel Mamayev was sent off for a last-man foul against Alejandro Dominguez.

The match took place in the Arena-Khimki stadium near Moscow. Cup finals have traditionally been held at Moscow's Luzhniki, but as nomadic CSKA play the majority of their home games on its plastic surface, it was felt that the Muscovites would have an unfair advantage. Lokomotiv Moscow's 28,000-capacity ground was already booked.

The two sides clashed earlier in the year at the Luzhniki in the pre-season Super Cup, with CSKA winning 2-1.

CSKA's Brazilian trainer Zico, who took over at the club in January, has now won his first Russian trophy.

"I've managed to win quite a few cups in Brazil, Japan, Turkey and Uzbekistan," he told Sport Express. "I hope I'll be able to add the Russian Cup to that collection on Sunday," Zico said before the game.