Moldovan leader calls on EU to act against Romania 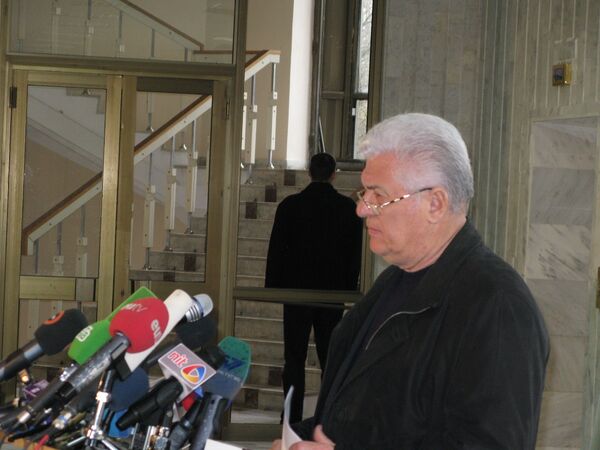 CHISINAU, May 24 (RIA Novosti) - Moldova's outgoing president has called on the European Union to take action against Romanian politicians responsible for last month's anti-government riots in the Moldovan capital.

Vladimir Voronin and his government have accused Romania of involvement in planning the disturbances in Chisinau, during which parliament and the presidential residence were stormed by protesters, many waving Romanian flags. Romania has denied the allegation.

"Why do the European structures not put the Romanian politicians in their place?" Voronin said during an interview with RIA Novosti.

"We have good relations with the European Union. And we are now working on a new plan to develop our relations. And we believe that the EU should put in their place those reckless officials, whatever their positions or status."

The EU's failure to control "such an out-of-control individual as [Romanian President Traian] Basescu" could prove "highly dangerous", Voronin warned.

Riots broke out in Chisinau after the Communist Party's April 5 election victory, which opposition activists said was marred by electoral violations. However, observers from Europe's main election monitoring body, the Organization for Security and Cooperation in Europe, gave their overall endorsement to the voting process.

After the riots, Moldova imposed visa restrictions on Romanians, and expelled the country's ambassador. The Romanian Foreign Ministry said Moldova was seeking to "shift responsibility for internal conflicts to Romania."

Last week, Moldova's parliament failed to elect a new president to replace Voronin, who has served the maximum of two consecutive terms in office. The ruling Communist Party was one vote short of a majority to have its choice of candidate approved. If a second vote scheduled for May 28 also fails, parliament will be dissolved.

Voronin warned of the dangers of a protracted political battle, in view of the difficult economic environment.

"We have been in the election process for almost four months, so for the country as a whole, for the economy, and for the people, early elections are not necessary or beneficial," he said.

He compared the situation to Ukraine, whose economic troubles have been exacerbated by long-running political strife.

"We have seen in recent years what has happened with the parliamentary elections in Ukraine. And we would not want this disease to come over to us, and for us to also be following continual election campaigns. These campaigns do not come cheaply."

He also questioned Moldovans' willingness to put up with another election.

"No one can say with certainty that over 50% of the electorate would turn out to vote."