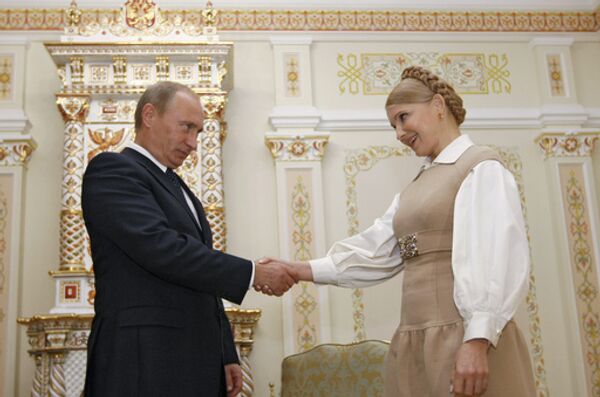 The announcement came amid fears of a new disruption in Russia's Europe-bound gas supplies via Ukraine, as the country, suffering a severe recession, needs to buy some 19.5 billion cubic meters at a cost of over $4 billion.

Speaking after talks with his Ukrainian counterpart Yulia Tymoshenko, Putin said: "We propose advance payment for transit of our gas to European consumers."

He said that supply stability is currently under threat due to "the upcoming elections in Ukraine and the possible reorganization of its gas pipeline network."

The premiers are in Kazakhstan for a meeting of Commonwealth of Independent States heads of government.

Putin said that disputes concerning transit and supplies of natural gas cannot be resolved until the Ukrainian leadership reaches a common position.

"I am asking the peoples of both countries to take note of this. Under such conditions and with such high risks it is unlikely that we will be able to solve our problems under this setup. We need a consolidated position from the Ukrainian leadership."

The gas contracts with Russia are one of a range of issues over which Ukraine's president and prime minister have clashed.

Earlier this week, President Viktor Yushchenko said the contracts signed with Russia at the start of the year are likely to be reviewed in the near future, as Ukraine is unable to meet its obligations under the current terms.

"Russia is ready to contribute its share... The size of this share should be determined in the course of negotiations," he said.

Russian energy giant Gazprom suspended gas deliveries to Ukraine on January 1 over non-payment and the sides' failure to reach a new gas deal. A week later, Gazprom accused Ukraine of stealing gas intended for EU consumers, and cut off supplies to the European Union via the country, prompting two weeks of gas shortfalls across much of Eastern Europe.

The standoff was resolved after negotiations between premiers Putin and Tymoshenko resulted in the signing of a new gas agreement for 2009-2019 on January 19.

Under the terms of the new gas deal, Ukraine will pay Russia European market prices - set at $450 per 1,000 cu m for the first quarter - with a 20% discount in 2009, while transit fees fixed under a previous agreement remain unchanged. Yushchenko has repeatedly criticized the deal.