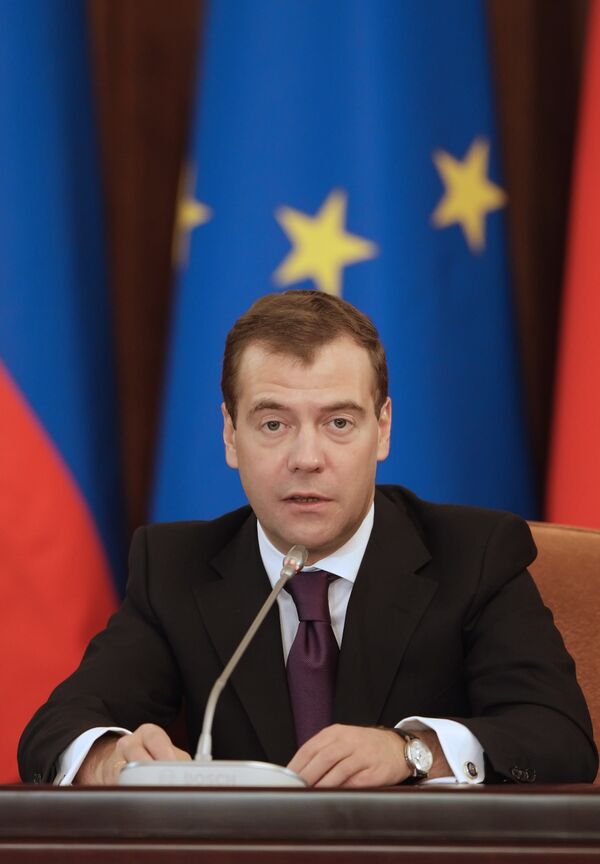 © Dmitry Astakhov
/
Go to the mediabank
Subscribe
International
India
Africa
Russia's president said on Friday the EU should consider giving Kiev a loan to ensure that natural gas supplies to Europe via Ukraine are uninterrupted.

KHABAROVSK, May 22 (RIA Novosti) - Russia's president said on Friday the EU should consider giving Kiev a loan to ensure that natural gas supplies to Europe via Ukraine are uninterrupted.

Speaking at a news conference after a Russia-EU summit in the Far Eastern city of Khabarovsk, Dmitry Medvedev said Ukraine needs to pump some 19.5 billion cubic meters, worth over $4 billion, of gas into its underground storage facilities.

"We are prepared to help Ukraine, but we would like a considerable part of the effort to be taken on by the European Union, those countries that want reliable energy cooperation," he said.

"Let us help organize funds for Ukraine. But Russia should not be the only one tackling the problem," he said. "If the Ukrainian side has the money, wonderful, but we have doubts in relation to Ukraine's ability to make payments."

Ukraine has asked Russia for a $5 billion loan, but the country's first deputy prime minister said on Thursday that there had been no official response from Moscow. Russian Deputy Finance Minister Dmitry Pankin said on Wednesday that no decision had been taken.

Prime Minister Vladimir Putin is expected to discuss the gas issue with his Ukrainian counterpart, Yulia Tymoshenko, on the sidelines of a CIS meeting in Kazakhstan on Friday.

The two premiers agreed the January deal that ended a dispute between Moscow and Kiev over gas supplies, transit and debts that had halted Russian deliveries via Ukraine for almost two weeks, leaving millions of Europeans suffering energy shortages.

A source in the Russian business delegation to the Astana meeting told RIA Novosti on Thursday that Gazprom had already paid Ukraine in advance for gas transit to Europe for the rest of 2009.

Tymoshenko said last month after a visit to Moscow that Ukraine had agreed with Russia that payment for gas to go into underground reservoirs would be financed by advance payments for transit via Ukraine.

Following the dispute between Russian and Ukraine at the turn of the year, energy security became a more important issue in EU-Russia relations, and the issue was a major topic at Friday's summit.