Uphill road to the EU-Russia summit in Khabarovsk - what's next? 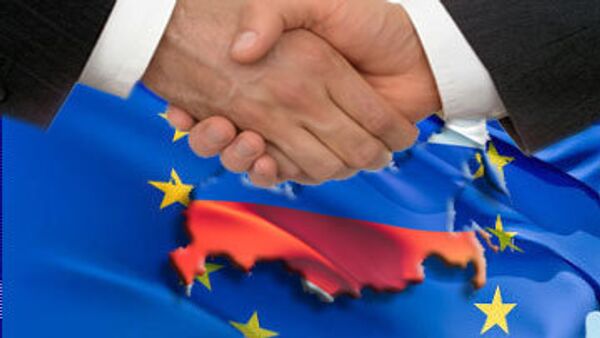 MOSCOW. (RIA Novosti political correspondent Andrei Fedyashin) - Judging by the agenda of the current Russia-EU summit in Khabarovsk on May 21-22, Russia and Europe lead a full and busy life.

MOSCOW. (RIA Novosti political correspondent Andrei Fedyashin) - Judging by the agenda of the current Russia-EU summit in Khabarovsk on May 21-22, Russia and Europe lead a full and busy life.

They discussed ways out of the world economic crisis, energy security, a new structure of European security, and protectionism. They also compared their approaches to major international problems - Iran, Afghanistan, the Middle East and Pakistan. Everything seemed to be quite functional, although the discussion was not entirely smooth.

However, the summit has raised two questions. First, how did we manage to hold it without more squabbles? Second, where do we go next?

The second question is much harder. On July 1, Stockholm will assume the rotating EU presidency, and the fall summit will take place somewhere in Sweden. The summits are held regularly - in spring and summer in Russia, and in fall-winter in the country which chairs the EU. There is every indication that the next summit will be even more of an ordeal than this one.

On the uphill road to the Khabarovsk summit, we seemed to bury all vestiges of cooperation and partnership. Since last August, Moscow and Brussels have been divided by the Caucasian war, Georgia, and the recognition of Abkhazia and South Ossetia. These events were followed by Russia's gas transit crisis with Ukraine and the shutdown of gas supplies to Europe. Later, the EU signed an agreement with Kiev on refurbishing Ukraine's gas pipelines without Russia's participation. Russia took inexpiable offense as if this agreement had come as a bolt from the blue.

The launch of the Eastern Partnership project in April was the last straw. The Kremlin considers this project, and not without grounds, to be an attempt to create another cordon around Russian borders. The project involves Armenia, Georgia, Ukraine, Moldova, Belarus, and Azerbaijan. These events were intertwined with spy extraditions, mutual accusations of protectionism, and scandals over kidnapped and returned kids.

This was the adverse background for the 23rd Russia-EU summit, probably the worst in the entire history of Russia-EU summits. The sides did not plan to draft a final communique. Indeed, what results could have been expected after all this? Russia did not even manage to show "its grandeur" to the Europeans. EU top officials - European Commission President Jose Manuel Barroso, EU foreign policy envoy Javier Solana, and Czech President Vaclav Klaus (the Czech Republic now chairs the EU) - arrived in Khabarovsk without much hope. As one European diplomat put it, "...if we get out of Khabarovsk with minimal damage, even without any breakthrough, this would be enough." Now the two sides are seriously thinking about holding one summit a year instead of two. The Russian prime minister could hold working meetings with EU top officials instead of a second summit.

Today, we are not even talking in real earnest about the need to sign a new agreement on partnership and cooperation to replace the one which expired in 2007 and has been regularly extended since then. Four consultations have been held on the new agreement, and the fifth one is scheduled for June. It is not quite clear, however, what we are going to discuss after Khabarovsk. The sides' positions on the agreement continue to be different. Moscow wants it to be general, whereas Brussels insists on regulating everything to the minutest detail.

It was clear even before the summit that Russia will not achieve its main goal there, which was to try and persuade Europe to sign a new agreement on energy security to replace the Energy Charter, which runs against our grain. A week before the summit, Brussels made it clear that it was ready to discuss any Russian proposals, but only in the context of the Energy Charter. In other words, the EU is satisfied with the charter and does not want to sign any other document, although in principle Europeans understand Russia's intention to update the charter to protect its rights in gas transit countries.

What they do not understand is why Russia wants to protect its gas rights in transit countries through Gazprom. For Europe, Gazprom is an evil gas empire. In the past few years, Brussels has been trying to limit the monopoly of gas suppliers and transit countries, and Gazprom, which Moscow stubbornly wants to see on the European market of gas transit and distribution, does not quite fit in with this policy. It would be interesting to know whether we consider such details when drafting new proposals on the contractual foundation of gas relations in Europe. The EU has been pursuing this policy for quite a time now.

Clearly, we will have to resolve our gas problems, but apparently we will not be able to do so without involving a third player in the game. Incidentally, this player was closely watching the Khabarovsk summit from the other bank of the Amur River.

It became known in Khabarovsk that Russia's proposals to set up a new system of gas supplies to China and other countries in Asia and the Pacific will be ready by the visit of Chinese President Hu Jintao to Moscow next month. These proposals will be part of Russia's Eastern Gas Program. It is not a response to the EU's Eastern Partnership but may help sober up those in Europe who claim that Russia fully depends on Europe's readiness to buy its gas. Diversification of sales will resolve this problem.

By and large, the discussion of new European security could be skipped altogether. This is not the right forum for it. Neither Barroso, nor Solana have any powers for that. All they can do is inform 27 EU members about Moscow's opinion. Such items are put on the agenda when no concrete results are expected on others.

It is hard to say how we will overcome this predicament, and who will be the first to make concessions to reach a compromise and bring Russia-EU relations back to normal.

There is no unanimity in the attitude to Russia in Greater Europe, either. In the past ten years, it has been split into two in this regard. There exist an unofficial club of "Russia's friends" (with some reservations, of course), which includes Germany, France, Italy, Greece, Cyprus, and a club of "convinced skeptics," such as Britain, all Scandinavian countries, the Baltic nations and Poland. The latter club has more allies in the European Commission. The Brussels bureaucrats have always disapproved of Moscow.

However, now another club is coming into being in the EU. It includes pragmatic skeptics. They are not too enthusiastic about Moscow, but they believe that they are going to have to do business with it because there will be no alternative to this in the foreseeable future. West European experts on the EU are listing Finland, Latvia, Estonia, Bulgaria, and Romania in this category.