Patriarch Kirill to hold mass meetings with young Russians in May 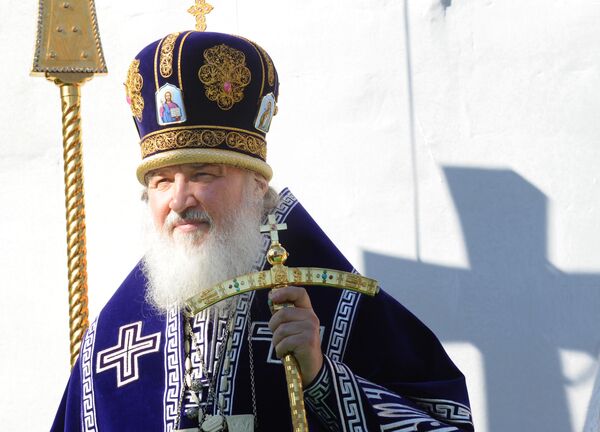 © Сергей Пятаков
/
Go to the photo bank
Subscribe
Patriarch Kirill, the head of the Russian Orthodox Church, will break new ground this month by attending mass gatherings with young people at sports arenas in Moscow and St. Petersburg.

MOSCOW, May 19 (RIA Novosti) - Patriarch Kirill, the head of the Russian Orthodox Church, will break new ground this month by attending mass gatherings with young people at sports arenas in Moscow and St. Petersburg.

Church spokesman archpriest Vsevolod Chaplin told journalists on Tuesday that the patriarch would for the first time address thousands of young people and answer their questions, with events in Moscow on Saturday and in St. Petersburg on May 29.

The Moscow Patriarchy said that the chief pastor's openness to communication with both believers and non-believers is common in Western churches, and something that the Russian church is trying to achieve.

"The existing economic crisis is a crisis of a consumer society based on the anti-Gospel principles of 'I want' and 'give me.' That's what we would like to talk to youth about," another spokesman, Vladimir Legoida, said.

Well-known young actors and pop stars are expected to attend the meetings, as well as Cossacks and bikers.

Kirill was enthroned as the patriarch of Moscow and all Russia on February 1, replacing Alexy II, who died in December at the age of 79. Alexy led a revival of faith in Russia following the collapse of the officially atheist Soviet Union.

Patriarch Kirill has also urged priests to reach out to society, especially to young people.

Speaking earlier this year during a visit to the Tula Region, south of Moscow, Patriarch Kirill said that if a priest merely "rings the bells, sits and waits for believers to arrive" then the Church will not meet people's demands, which he said included improving the moral climate in society, as well as reducing the number of divorces, abortions and crimes.

"The Lord said: 'Go ye therefore, and teach all nations.' He did not say: 'Sit there and wait until people arrive,'" he said. "I think today the main object of our efforts should be schools, education and youth."

The patriarch also said then that it was necessary to learn how to talk to young people correctly.