Russia sets up commission to prevent falsification of history 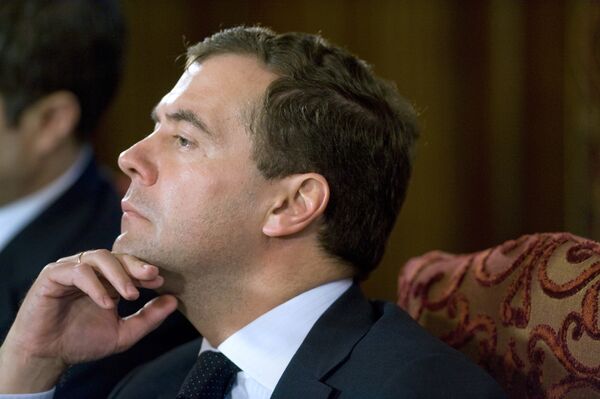 Russian President Dmitry Medvedev has ordered the establishment of a special commission to counter attempts to falsify history to the detriment of Russia's interests, the Kremlin said on Tuesday.

MOSCOW, May 19 (RIA Novosti) - Russian President Dmitry Medvedev has ordered the establishment of a special commission to counter attempts to falsify history to the detriment of Russia's interests, the Kremlin said on Tuesday.

The commission will be led by the presidential administration chief of staff, Sergei Naryshkin.

The president has repeatedly criticized attempts of foreign states to falsify history, in particular post-Soviet countries' positions on World War II and the Stalinist repression.

The most prominent cases have been Ukraine's attempts to have the Stalin-era Holodomor famine internationally recognized as an act of genocide by the Soviet Union, and Baltic countries' demands for compensation for the Soviet 'occupation'.

In his May 8 video blog, President Medvedev said that attempts to rewrite history are becoming "more and more harsh, depraved and aggressive."

Russia's new commission will comprise 28 officials from the presidential administration, the Federal Security Service (FSB), the Foreign Intelligence Service (SVR), the State Duma, the Public Chamber, the state archival and science agencies, as well as the ministries of foreign affairs, regional development, justice, and culture.

On Tuesday, a Soviet World War II veteran accused Latvia of seeking to re-write history, in his long-running trial for war crimes. Vasily Kononov, who led a group of resistance fighters against Nazi Germany in the Baltic state during WWII, was arrested in 1998 and held for two years, but Latvia's charges against him were overturned by the European Court of Human Rights.

The war continues to be a contentious issue in Russia's relations with both Estonia and Latvia, over the Baltic states' perceived glorification of Nazi collaborators.

Parades in honor of Waffen-SS veterans, involving veterans from the Latvian Legion and the 20th Estonian SS Division and their supporters, are held annually in the two Baltic states.

In April 2007, Tallinn was hit by mass protests after the Estonian authorities ordered the removal of a Soviet WWII monument, along with the graves of Soviet soldiers who fought against Hitler's forces.