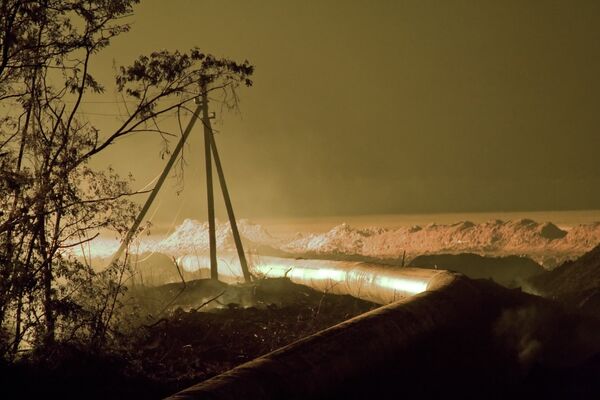 The pipeline is a rival project to the Western-backed Nabucco pipeline, designed to bring gas from Central Asia and the Caspian to Europe bypassing Russia. The EU, nervous about growing energy dependence on Russia, is backing the project despite the current economic crisis.

The agreements with the Bulgarian Energy Holding, Greece's Desfa and Serbia's Srbijagas outline pre-investment cooperation and requirements for joint ventures to design, build and maintain the pipeline.

In a new additional agreement to their memorandum of understanding on South Stream, Gazprom and Italy's Eni said on Friday they would increase the pipeline's capacity from the planned 31 billion cubic meters of gas a year to 63 billion, Gazprom announced.

The two companies have already set up a joint venture to build the pipeline that will run through the Black Sea to Bulgaria on to Greece, Serbia, Hungary and Italy.

Italian Prime Minister Silvio Berlusconi traveled to the Black Sea resort of Sochi to attend the signing of the deals along with his Russian counterpart, Vladimir Putin.

Europe has expressed concerns about being dependent on Russia, which supplies a quarter of its natural gas needs. Calls for diversified supplies intensified following bitter price disputes between Russia and Ukraine in recent years, when Moscow cut off gas to Ukraine, affecting consumers across Europe.

Moscow has argued that South Stream and another gas link to Europe via the Baltic Sea, Nord Stream, would cut its dependence on transit states like Ukraine and improve European energy security.

Echoing Putin, Berlusconi told reporters: "Under the circumstances, a major step toward boosting energy security was made."

Gazprom CEO Alexei Miller said on Friday South Stream would cost an estimated 8.6 billion euros ($11.6 billion), and the pipeline launch date had been set for December 31, 2015, although the partners would try to complete the project earlier if possible.

Talks between Russia and its partners in the project have not run smoothly, with Italy seeking the right to sell gas from the pipeline not only domestically, and Bulgaria also planning to host the Nabucco pipeline.

In April, Bulgaria, affected by Russia's cutting off gas supplies to and via Ukraine in January, hosted a "gas summit" of major producers and European consumers to promote Nabucco. Sources of gas supplies remain a problem for the project.