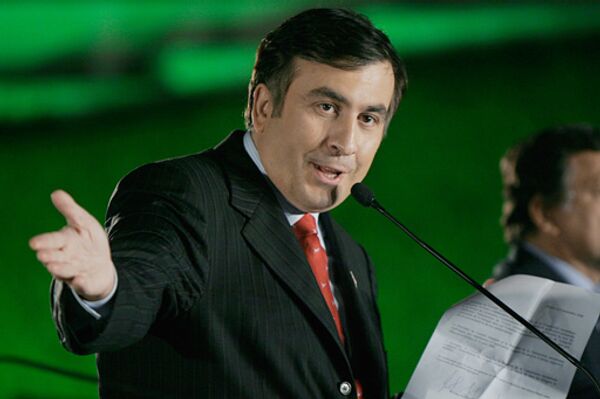 © David Hizanishvili
Subscribe
Georgia's opposition parties that have been demonstrating for over a month demanding the president step down are refusing to take part in a constitutional commission, an opposition leader said Friday.

TBILISI, May 15 (RIA Novosti) - Georgia's opposition parties that have been demonstrating for over a month demanding the president step down are refusing to take part in a constitutional commission, an opposition leader said Friday.

Eka Beseliya, leader of the For a United Georgia movement, who, along with other parties, met with President Mikheil Saakashvili's on Monday to try and find a compromise to end ongoing civic unrest, said his initiative "is aimed at strengthening his authority."

The leader of the New Right party, David Gamkrelidze, said the initiative was also aimed at playing for time.

The opposition's HQ said Friday that protests would be held in Batumi and Kutaisi on May 20 and May 21 respectively.

Opposition groups, who first took to the streets in Tbilisi on April 9, have criticized Saakashvili for failing to carry out democratic reforms and dragging the country into the disastrous war with Russia last August, resulting in the permanent loss of two separatist provinces.

Last week, Georgian opposition leaders gave Saakashvili a three-day deadline to meet with them to discuss their demand for early elections, saying that if he refused to negotiate they would start blocking the country's highways.

Saakashvili, a U.S.-educated lawyer who came to power on the back of mass street protests five years ago, agreed to the talks, and the meeting took place on Monday behind closed doors in the Interior Ministry, however the opposition said they ended in deadlock.