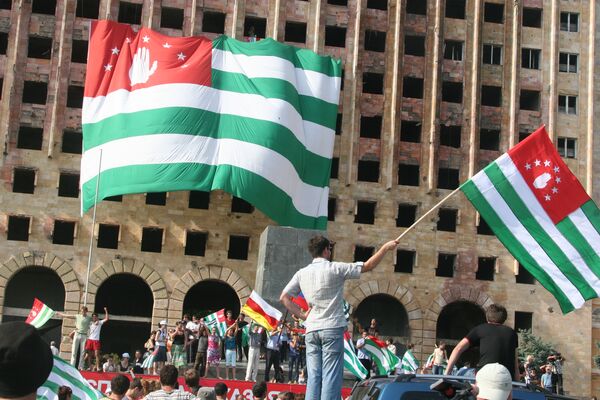 Russia and Abkhazia will sign an agreement on the deployment of a Russian military base in the former Georgian republic within the next two weeks, the Abkhaz president said on Thursday.

SOCHI, May 14 (RIA Novosti) - Russia and Abkhazia will sign an agreement on the deployment of a Russian military base in the former Georgian republic within the next two weeks, the Abkhaz president said on Thursday.

"The land has been allocated, a location identified, and work has started there. We are awaiting an agreement between the republic and the Russian Defense Ministry," Sergei Bagapsh told journalists after a meeting with Russian Prime Minister Vladimir Putin.

"It [the agreement] is almost ready. I think it will be signed in a week or two," he said.

The Abkhaz president earlier said Russia would have a total of 3,800 troops deployed in the republic for the next 49 years.

Bagapsh also said units of Russian border guards will be deployed on Abkhazia's state border by the beginning of June.

Under the agreements, Russia will guard the Abkhaz and South Ossetian borders, including maritime frontiers, until both republics form their own border guard services. The agreements, for an initial period of five years, can be renewed upon their expiration.

Bagapsh ruled out the possibility of asking Moscow in the near future to become part of Russia.

"Why would we approach Russia with such a request so soon when Russia only recently recognized us as an independent state?" he said in reply to a reporter's question.

Russia recognized Abkhazia and South Ossetia as independent states on August 26 last year after a five-day war with Georgia, which attacked South Ossetia to try to regain control of the province, which had been de facto independent since the early 1990s.